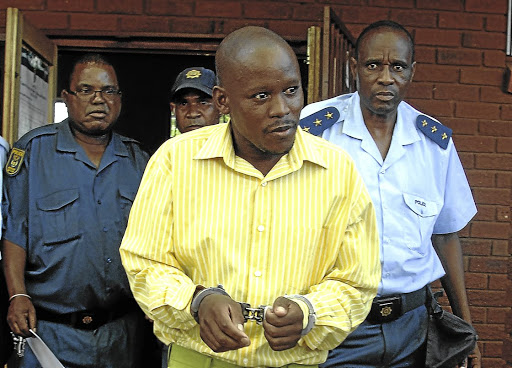 Lesiba Kekana after his appearance in court for the murder of his four sons.
Image: Sandile Ndlovu

A father jailed for 52 years after killing his four children thought he'd been hard done by and asked the Supreme Court of Appeal to reduce his sentence.

Lesiba Kekana asked a five-strong bench of judges to take into account the fact that he was grief-stricken over the loss of his children. Calling the argument "egregious in the extreme", judge Tati Makgoka and colleagues instead increased his sentence to life.

"It is difficult to imagine a more callous and despicable deed than a parent killing his own children," Makgoka said in his judgment on October 31.

"The sentence that is imposed should... reflect the community's indignation over [Kekana's] ghastly deeds."

Kekana was arrested in September 2015 for slaughtering his four sons after an argument with his wife about her affair with another man.

He cut the throats of Bokang, 6, Keneilwe, 10, Thlologelo, 13, and Lekgoledi, 4, at their home in Zebediela outside Lebowakgomo, Limpopo, making his wife listen on the phone to one of the killings.

“I want to apologise unreservedly for killing my kids"

The Limpopo man convicted of the murder of his four sons by slitting their throats has offered his apology for his deeds. Lesiba Kekana told the ...
News
6 years ago

He pleaded guilty to four counts of murder and one of assault, relating to an attack on his wife with an axe when she spurned his sexual advances three months before.

Sentencing Kekana at the High Court in Polokwane in 2016, judge Joseph Raulinga said he had shown no mercy by slaughtering his children like sheep.

But he said he could not impose a heavier sentence because when Kekana pleaded guilty he invoked a section of the Criminal Law Amendment Act relating to killings that were not premeditated.

But, Makgoka said the facts of the case showed the murders were premeditated.

"He used his children as pawns to be sacrificed in his battle with his wife," said Makgoka. "When considering an appropriate sentence, the lodestar remains the enduring triad - the crime, the offender and the interests of society."