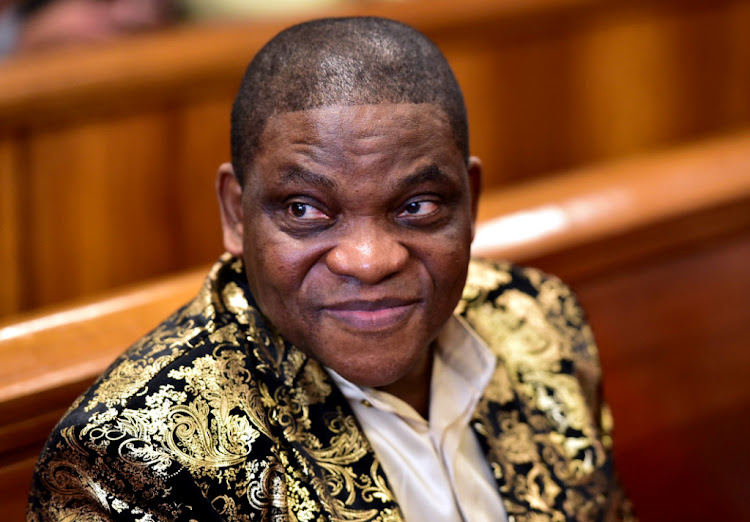 An anxious couple of hours lie ahead for controversial Nigerian pastor Timothy Omotoso as he and his two co-accused await a ruling by a Port Elizabeth High Court judge on whether or not the charges against him will be quashed.

On Monday‚ advocate Peter Daubermann‚ a legal representative for Omotoso‚ 58‚ and his co-accused‚ Lusanda Sulani‚ 36‚ and Zukiswa Sitho‚ 28‚ argued the merits of his notice to object to the charges as well as an application to have charges withdrawn.

The trio face 63 charges in total ranging from racketeering to sexual assault and rape allegedly committed across the country and abroad‚ including in Nigeria and Israel.

Daubermann asked the court to drop the charges on the grounds that the state had failed to supply sufficient information and particulars in the charge sheet which includes the indictment and summary of substantial facts.

“At no instance is a date of an alleged offence contained in the indictment … we simply have a year‚ [neither] does it specify the place where the alleged offences took place‚” Daubermann said.

Daubermann argued that there must be specific detail provided to the defence to allow the accused to answer to the charges‚ including addresses and not merely towns or countries where alleged offences took place. An example used by Daubermann included a charge of rape which allegedly took place in Israel.

“The onus is on the state to put up a proper charge sheet‚ which it does not‚” Daubermann said.

State prosecutor Nceba Ntelwa told Judge Mandela Makaula that it was not the state’s obligation to provide its evidence to the defence.

Ntelwa said the charge sheet contained the periods during which the alleged offences took place as well as the vicinity.

Ntelwa argued that most of the offences took place over a period of time and the complainants‚ whose ages vary‚ with the youngest being 13‚ could not recall specific dates for this reason.

“A charge sheet cannot be defective because of the lack of particulars … the indictment mentions the town‚” Ntelwa said.

Daubermann hit back claiming that the charge sheet was fatally defective “because it doesn’t comply with the constitution and the accused’s right to a fair trial”.

The alleged victims of Nigerian pastor Timothy Omotoso have warned people not to fall prey to “fake pastors”.
News
4 years ago

“The accused haven’t been furnished with any evidence the state intends to rely on – that is completely incorrect.

“What is the probability that not a single complainant is able to calculate or work out when she was allegedly raped or sexually assaulted?” Daubermann asked.

Daubermann told the court that without specific information such as dates and places it would be impossible for the accused to raise an alibi or determine who he would need to testify as a witness.

Makaula said he would make a ruling on whether to quash the charges at 3pm.

After the court adjourned‚ and while Omotoso was being led down to the court holding cells‚ supporters inside the court cheered loudly calling out for ‘Daddy” – the name they call the preacher.

Outside the court a crowd of roughly 150 people held placards emblazoned with Omotoso’s face while they sang and danced.

Omotoso’s wife‚ Taiwo‚ was escorted from the court building to an awaiting car while being covered with umbrellas and other items to shield her from photographers.

Omotoso was arrested in April 2017 at the Port Elizabeth airport. He has unsuccessfully applied for bail numerous times including approaching the high court and the Supreme Court of Appeal to have his bail refusal reviewed.

Sulani and Sitho were each granted R2 000 bail in December.