File photo of Nhlanhla Nene being sworn in as the Minister of Finance during the Swearing-in ceremony of the new Deputy President, Cabinet Ministers and Deputy Ministers as Members of the National Executive on February 27, 2018 in Cape Town, South Africa.
Image: Gallo Images / Ziyaad Douglas

Finance minister Nhlanhla Nene has asked President Cyril Ramaphosa to relieve him of his duties.

This follows growing calls for Nene to resign after revealing that he visited the Guptas several times during his tenure as both deputy minister and finance minister in then president Jacob Zuma's government.

Sowetan understands that Nene approached Ramaphosa at the weekend.

Now it is up to Ramaphosa to decide Nene's future. The latter was expected to deliver the mid-term budget in parliament in two weeks time.

ANC officials are on a two-day retreat in Limpopo which ends today. Nene is part of the agenda.

Government sources said Nene approached Ramaphosa following negative public reaction to his apology on Friday for not owning up to his private meetings with the Gupta family.

Zuma fired Nene in December 2015 as finance minister and Ramaphosa reinstated him in February this year.

At the time, speculation was rife that he was fired because he was refusing to take orders from the Gupta family. 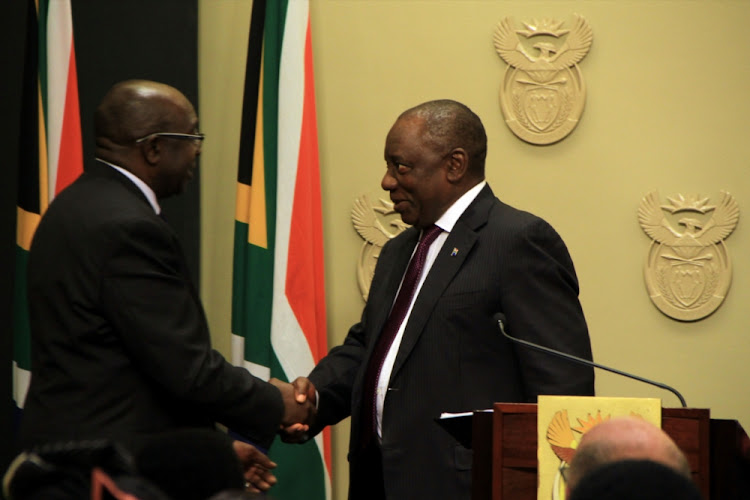 Finance minister Nhlanhla Nene is believed to have caved in to the public uproar for him to resign following his admission he met the Guptas several times at their home.
Image: Gallo Images / Ziyaad Douglas

Ramaphosa's spokesperson Khusela Diko could not confirm yesterday whether Nene and Ramaphosa had met to discuss the issue. She, however, said: "The president has, however, noted the ongoing proceedings of the Zondo commission, including the testimony of the finance minister.

"He believes the commission is fulfilling its mandate, which was to establish the nature and extent of state capture. He is also [of the] view that no person should be above scrutiny.

"Having said that, the president also believes that the commission should be allowed to complete its work and present findings that will guide further action."

The last statement could suggest that Ramaphosa is not ready to axe Nene, even though sources within his inner circle believe he has no option but to let him go.

Nene's admission that he met with the Guptas shocked the nation as he had previously said he only met them at government functions.

At the commission, he said he twice refused to sign off a nuclear deal with Russia because it would have had severe financial implications for the country and that his own colleagues were hostile towards him after he refused to sign the deal.

Justifying his meetings with the Guptas, Nene said on Friday: "I say this being mindful of the fact that it is quite common practice, not only in South Africa but globally, for public office bearers to attend gatherings, including dinners, at residences of business people, fellow politicians and other stakeholders.

"But context matters. As soon as I became aware of the controversy swirling around the family's business dealings, I should, subject to there being a legitimate reason for doing so, have met Guptas at my office accompanied, as is customary, by a ministry of finance or National Treasury official."

A report has found that Nhlanhla Nene's son was involved in securing a PIC investment while he was still its chairperson.
News
3 years ago