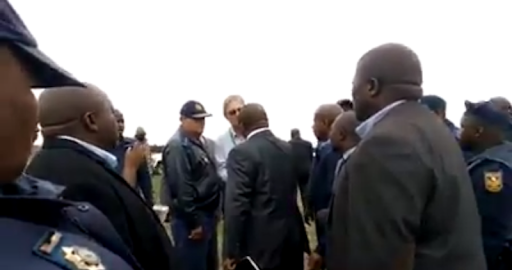 His associate‚ attorney Johan Lorenzon‚ confirmed that Spoor had appeared in the Bizana Magistrate’s Court. He was remanded on warning to October 25.

His appearance comes amid calls from Amnesty International and other civic groups for all charges to be dropped immediately and for a probe into the alleged tear-gassing of anti-mining residents by police on the Wild Coast at the weekend.

Spoor has described the charges as “nonsense”‚ while the human rights group Amnesty International slammed what it described as the excessive use of force by SAPS members at a meeting at Xolobeni village on Sunday. The meeting was called by Mantashe.

Video clips show Spoor and Mantashe in a heated verbal exchange outside a large marquee in which the minister accuses Spoor of disrupting his meeting‚ while Spoor shouts: “I am trying to help you.”

Spoor said in a statement that members of the Xolobeni community‚ who stood to be evicted from their land for an Australian-led mining project‚ were not allowed in to the marquee where the meeting was held until all places had been taken by ANC supporters and pro-mining groups bussed in from outside the community.

When members of the affected Amadiba Crisis Committee were finally admitted‚ they were confined to a small corner and no one representing the affected community was allowed on the podium.

“He said he would not entertain any proposals from me. Things got heated. He ordered his men to remove me. I went to appeal to Minister Mantashe. When I tried to speak to the minister (who is an old comrade I know from his NUM days) I was grabbed‚ beaten and arrested. It is clear that the plan was to deny the affected community a hearing.”

A spokesman for Mantashe’s office‚ however‚ described Sunday's meeting as “positive”.

“All parties present were given an opportunity to present their views either for or against mining‚ including a representative of the Amadiba Crisis Committee. It’s unfortunate that that a small group of people were instigated to disrupt and suppress discussions‚ but the meeting proceeded as planned‚” the spokesman said.

Before the fracas‚ Mantashe’s verified Twitter account posted: "We cannot allow our children‚ the future of South Africa‚ to be destroyed by people with selfish interests. If young people have views‚ they must freely express those views. They should guard against being a rented crowd with intentions of only to disrupt…"

Now Amnesty International has called for the charges against Spoor to be dropped and urged that an investigation be held into the “intolerable and excessive use of force”.

“Responding to witness testimonies‚ video footage and photos received by Amnesty International South Africa indicating that the SAPS used teargas‚ stun grenades and death threats to disperse protesters in the Xolobeni community‚ Shenilla Mohamed‚ Executive Director of Amnesty International South Africa‚ said it is unacceptable that the SAPS resorted to violence and threats to disperse peaceful protesters. The police must remember that community members have the right to peaceful assembly. We must not forget the tragedy that happened in Marikana in 2012‚ and the repercussions it has had for that community and beyond.

“The video footage we have seen is alarming as it appears to show the SAPS using excessive force to disperse community members and prevent them from attending a meeting called by the Department of Mineral Resources about a proposed titanium mine in the area. “As this meeting was called specifically to hear community views regarding the proposed mine‚ the fact that community members opposed to the mine were prevented from joining‚ harmed their right to participation in public affairs as well as their right to defend their ancestral lands threatened by the mining project. “What happened at Xolobeni must be investigated and those responsible for human rights violations should be brought to justice‚” Amnesty said.

The Bench Marks Foundation‚ an independent non-governmental organisation mandated by churches to monitor the practices of multi-national corporations‚ has also accused police of tactics “reminiscent of those used by the apartheid police”.

Executive director of Bench Marks John Capel said genuine voices of those who stood to lose most from mining had been shut out. “As a result‚ the organisation had no choice but to withdraw its invitation to the minister to give the keynote address at its conference in October. “The Amadiba community was hoping for an open and honest engagement‚ but it seems Minister Mantashe‚ like his predecessors‚ is brazenly pro-mining‚ and intent on blocking the genuine voices of communities impacted on.”

Eastern Cape police spokesman Captain Khaya Tonjeni said: “The matter is in front of the court of the law and unfortunately as the Eastern Cape police‚ we cannot comment on a matter that is sub judice”. Moses Dlamini‚ a spokesman for the Independent Police Complaints Directorate‚ didn't immediately respond to queries.