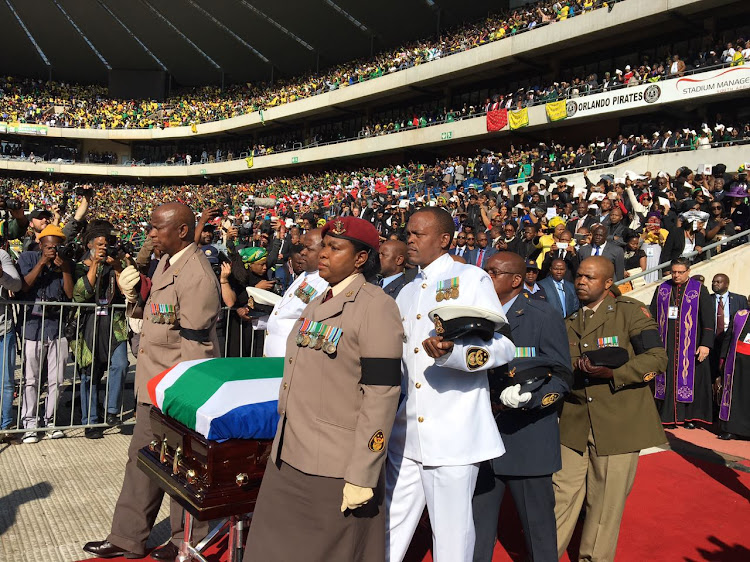 Winnie Madikizela-Mandela's daughters Zenani and Zindzi will break their silence after a period of mourning to speak at their mother's official funeral proceedings.

Before they address the crowd of mourners at Orlando Stadium‚ family representatives will speak and a tribute from the struggle veteran's grandchildren will be delivered by Zindzi's son‚ Zondwa. The businessman is controversially known for being a director of Aurora Empowerment Systems‚ who fell foul of the law alongside Khulubuse Zuma for stripping the assets of the liquidated Pamodzi Gold's mines.

At Mama Winnie's 80th birthday party in 2016‚ Zondwa Mandela lauded his grandmother for her strength and warmth. Zindzi was particularly close to her mother‚ and in celebrating her birthday at the same function‚ recounted personal anecdotes to guests at the Mount Nelson Hotel in Cape Town.

She highlighted her mother’s love for gardening‚ shopping‚ hoarding and spending time with her grandchildren and great grandchildren‚ as well as how supportive she was to her family‚ saying she was humbled and proud to have inherited her genes.

Family, friends, politicians and dignitaries will be joined by thousands of South Africans as they pay their final respects to Winnie ...
News
3 years ago

“There are many books written about her‚ documentaries produced and so on. But there are also some parts of her that people don’t know about‚" Zindzi said of Mama Winnie. "My mother is a very keen gardener. I for example was two hours late for my wedding because my mother had to water the garden. But that is my mother‚ she loves to be surrounded by beautiful things and she loves to make beautiful things grow‚ it's just her nature.”

Both her love of family and beauty in nature will come together at the gravesite chosen for Madikizela-Mandela: She will be laid to rest this afternoon at the peaceful‚ well-manicured gardens of a Fourways private cemetery. It is believed that her grave will be next to her great grandchild Zenani Mandela‚ who died aged 13 in a car accident after the 2010 Soccer World Cup kick-off concert‚ also at Orlando Stadium. Zenani was a granddaughter of Zindzi's.

The official funeral proceedings at the stadium will bring together political rivals‚ including the ANC's Cyril Ramaphosa and the EFF's Julius Malema‚ both of whom also joined her at the 80th birthday party. Ramaphosa told her that night: “Mama‚ thank you for bringing‚ as you have always done‚ various people together. Bringing Patricia de Lille‚ myself and other members of the ANC as well as Julius and Dali Mpofu‚ wow! You are indeed the mother of the nation."

Mourners are streaming towards Orlando Stadium for the funeral service of the late struggle stalwart Winnie Madikizela-Mandela.begin.
News
3 years ago

Turning to the audience‚ Ramaphosa said: “She’s been over the years‚ a constant companion throughout our lives and throughout our struggles. She has been a mother‚ a comrade‚ a comforter."

As South Africa's and the ANC's president‚ Ramaphosa will deliver the official eulogy for Madikizela-Mandela today.

Mama Winnie was born in Mbizana in the Eastern Cape on 26 September 1936 and passed away in Johannesburg on Monday‚ 2 April 2018.

An obituary for her on the funeral programme states: "Mama Winnie represents a generation of South African leadership and black women who were exposed to the full brutality of the apartheid regime because of their political activity. She endured continuous harassment at the hands of the apartheid security police and was subjected to torture while in prison. While the pain that she endured during these years could not be forgotten‚ she did not allow it to break her spirit and humanity. Until the end‚ Mama Winnie raised her voice in support of meaningful transformation in South African society. She demanded social justice‚ and came to represent the hopes and dreams of our country’s poorest and most vulnerable."

It was a jovial mood in the buses shuttling mourners to Winnie Madikizela's funeral at Orlando stadium in Soweto on Saturday.
News
3 years ago

It is a quiet morning in Orlando West‚ Soweto‚ early on Saturday morning as the nation prepares to bid its last respects to Winnie.
News
3 years ago

“Mam’ Winnie was a true reflection of Soweto and that’s why we are here to take her home.” These were the words of Jacob Leboa, who was among ...
News
3 years ago
Next Article