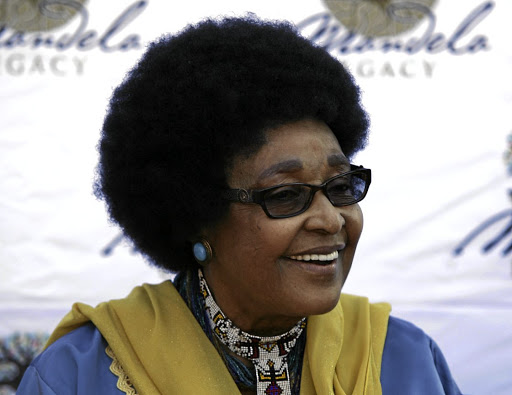 Struggle icon Winnie Madikizela-Mandela survived the brutality of apartheid to become a revered icon of the Struggle.
Image: VATHISWA RUSELO

On Monday April 2, one of the icons of our Struggle, Winnie Nomzamo Madikizela-Mandela, affectionately known as Mam' Winnie, passed on.

And, like in the case of many other South Africans, my heart sank.

The Mother of the Nation was no more.

It felt like a gloomy cloud had descended upon the nation. I shed a tear - a tear of a nagging pain that told me how hard it was to accept the reality of the situation.

Mam' Winnie, you were many things wrapped into one - a mother to most, a neighbour, a revolutionary.

You were a leader in your own right, a gender and political activist as well as a woman of faith.

Mam' Winnie, your dogged resolve to rid our society of hopelessness and other ills was a project very close to your heart. And, clearly, you would have wanted to do more before you passed on.

Alas! A glimpse at your pictures that started trending immediately after your demise depicted a cocktail of mixed emotions, almost giving us the story from inside your heart. These pictures have, demonstrably, given us the snapshot of your life - full of cheerfulness and joy, on the one hand; anguish, pain and sadness, on the other.

The common denominator of what the pictures depicted is that you were an open book: what we saw, was what we got.

The trajectory of your life can be described only as a mirror image of what your own people had gone through and experienced in conquering the brutal system of apartheid and racial tyranny.

Mam' Winnie, you were true to your own conscience and by your own actions and deeds you confirmed to all of us that one cannot conquer what you will not confront.

Mam' Winnie, you have seen it all; your trials and tribulations bore testimony to the long journey of your struggle. You tasted house arrest, detention without trial, solitary confinement and everything that the enemy could employ to destroy your soul and dampen your spirit.

The enemy did not understand that their brutality became a clarion call towards the fight for freedom and emancipation.

Mam' Winnie, you are the epitome of a true revolutionary - always humble, selfless, inspirational, and dedicated.

You had an incredible sense of hope. You were often shaken, but found standing at all times.

Mam' Winnie, in whatever you did, you gained strength through perseverance.

You took courage in every crisis moment. You were moved by your belief and hope for the dawn of a new South Africa.

You dealt with mundane bread- and-butter issues. In fact, you did more than what this tribute can ever express.

As the Mother of the Nation, you were always modest, awe-inspiring and forever astute, albeit unobtrusively.

Mam' Winnie, you have undoubtedly, earned your stripes to be called mother of the nation. To many of us, you were and still remain our mother, even though the apartheid regime denied you the opportunity to be wife and mother to your own husband and children, respectively.

Indeed, you said: "The years of imprisonment hardened me . Perhaps, if you have been given a moment to hold back and wait for the next blow, your emotions wouldn't be blunted as they have been in my case. When it happens every day of your life, when that pain becomes a way of life, I no longer have the emotion of fear. There is no longer anything I can fear. There is nothing the government has not done to me. There isn't any pain I haven't known."

Mam' Winnie, your spirit beckons us all to seize the day; to capture the moment of your heart and the benefit of your pain. Yes, we can clearly hear what you are saying to us. We need to catch what you have left behind because it is wealth to our collective memory and consciousness.

As we lay your remains to rest, we know that your voice, which instilled fear within the ranks of the apartheid apparatus, shall remain a clarion call to all of us, young and old, urban and rural, black and white.

It is a call to continue your arduous journey of nation-building towards a truly democratic, nonsexist, nonracial South Africa.

See you in the morning, Mam' Winnie. Lala ngoxolo!