Mbalula: Decisions about taxis will be binding for all — even those shunning lekgotla

The National Taxi Association (NTA) has warned transport minister Fikile Mbalula that should the decisions emanating from the national taxi lekgotla negatively affect  its members, it will not hesitate to approach the courts.

Mbalula is hosting a national taxi lekgotla in Boksburg, Ekurhuleni, which started on Thursday. The three-day lekgotla is meant to address challenges faced by the industry and to try to achieve consensus on its future.

“The decisions made at the lekgotla should not have a negative impact on our business and should that be the case, we will test their constitutionality through our justice system,” NTA spokesperson Theo Malele said.

The NTA snubbed the lekgotla this week.

Speaking at the lekgotla, Mbalula said: “We must not speak past each other as if we are singing on stage ... We must talk facing each other.

He then warned the NTA that decisions taken at the lekgotla would be binding for all.

“Those that think that this process is not important ... and [were] invited to participate, the disadvantage is that we are going to take decisions on their behalf and they will be binding.”

He said he wants the NTA and Santaco to come to talk about what is hindering them.

“The minister of transport cannot derail Santaco as it is a legally registered body in the taxi industry. I cannot come here and say they do not exist. I didn’t form them. When I joined government Santaco was being recognised,” Mbalula said.

He then called for the unity of the taxi industry. 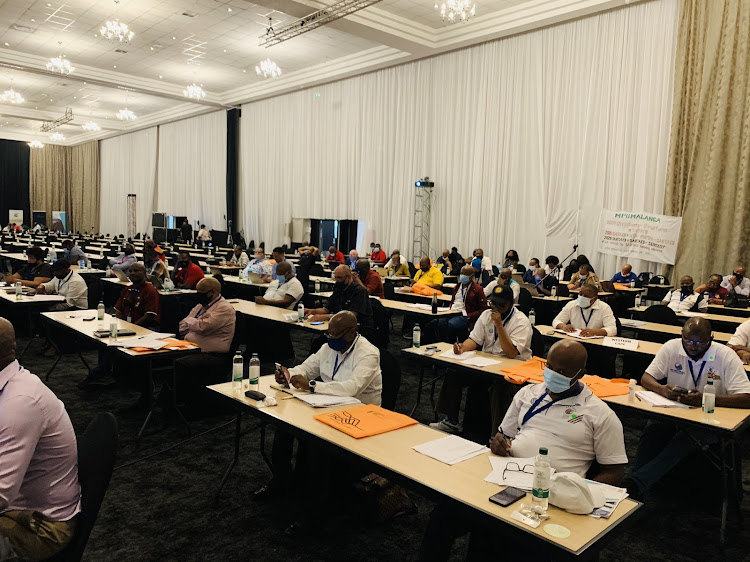 Delegates at the national taxi in Boksburg, Ekurhuleni.
Image: supplied

On Wednesday, Malele said the NTA’s national executive had held a virtual meeting with Mbalula where they informed him that they would not participate at the lekgotla.

Malele claims that they also informed Mbalula that the NTA has not participated at the provincial makgotla and will not be participating at the lekgotla pending Mbalula levelling the playing fields by creating a climate conducive to a free, fair and equitable participatory environment for the NTA.

“The NTA maintained that it will not participate in a process that violates the freedom of association as enshrined in the constitution and seeks to deliver the taxi industry to the highest bidder,” Malele said.

He said the NTA also raised serious concerns about the predetermined outcomes of the lekgotla which seek to entrench Santaco as the apex leadership of the taxi industry and the dangerous intention to grant Santaco statutory powers akin to a referee and player scenario.

Contacted for comment, Mbalula’s spokesperson Ayanda Allie Paine said Mbalula is engaging the NTA directly and therefore will not address their issues via the media.

Speaking at the opening of the lekgotla on Thursday, President Cyril Ramaphosa said the formalisation, regulation and economic empowerment of the taxi industry is at the forefront of government's endeavours to improve the industry.

“This three-pronged strategy reflects the recommendations of the National Taxi Task Team set up in 1995 to look at the challenges facing the industry — 25 years later, we are taking stock of how far we have come,” Ramaphosa said.

Ramaphosa said a number of challenges that had tarnished the reputation of the industry had to be addressed.

“These include the issue of labour relations and allegations of exploitation of workers, the high number of road accidents involving taxis, the industry's response to the rise of e-hailing services, and compliance with tax laws.

“We also need to address the conflict relating to competition over routes and associated acts of violence and criminality as we often see,” he said.

He said just as the taxi industry must overcome issues of safety and violence, the government remained committed to driving interventions that would strengthen the industry.

According to a document discussed at the lekgotla, it is estimated that the taxi industry generates about R50bn in revenue annually and spends more than R20bn on fuel alone.

The lekgotla continues until Saturday.

Ramaphosa urges taxi sector to clean up its act

President Cyril Ramaphosa has called on the taxi industry to use its historic conference to end levels of lawlessness  and disrespect for women that ...
News
6 months ago

Transport minister Fikile Mbalula may have to work harder to get the entire taxi industry to endorse the Taxi Lekgotla which is instrumental in his ...
News
6 months ago
Next Article