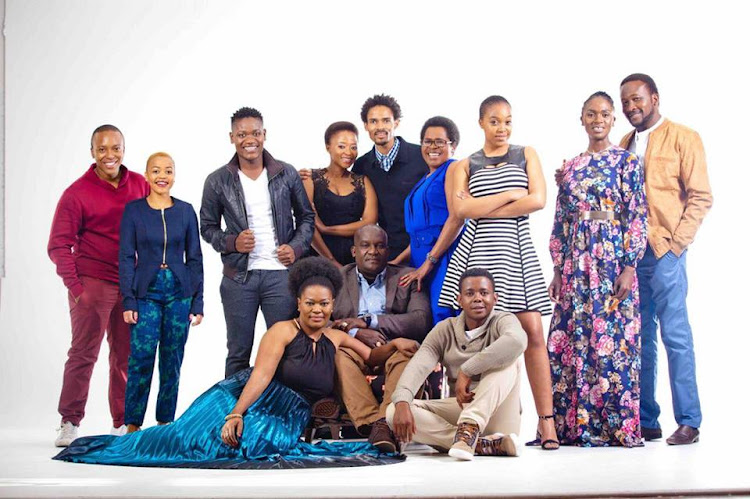 The cast and crew of Skeem Saam knuckled down to serious business yesterday as production for the popular SABC1 soapie resumed at Sasani Studios is Johannesburg.

Uzalo, the show that is expected to run out of new episodes to air next week, is set to start filming again tomorrow, while Muvhango is due to begin shooting next week.

As the production begun yesterday, majority of SABC soapies have banned kissing scenes in order to adapt to the new normal in the age of the deadly Covid-19 pandemic.

Skeem Saam confirmed that Rachel (Lesego Marakalla) and Marothi (Macks Papo) will no longer be filmed in bed together.

"The scenes that are shot during this time are carefully chosen - no scenes where the cast are required to hug, touch or be in proximity that is too close with one another," Skeem Saam spokesperson Sumaya Mogola said.

There will also be no kissing on Uzalo.

"No intimacy will be permitted in performance. Where possible, the number of cast members participating in a scene will be limited," Uzalo head of public relations Nomfundo Zondi said.

Uzalo and Isibaya are running low on new episodes

Uzalo and Isibaya are the first daily dramas to run out of episodes due to the national lockdown.
Entertainment
1 year ago

Clement Maosa on living without parents: 'I pray Covid-19 won't separate us from loved ones'

"The pain is unbearable and almost impossSkeem Saam star Clement Maosa knows what it is like to have to bury his parents and hopes that the Covid-19 ...
Pic of The Day
1 year ago

"The Muvhango creative aesthetic naturally does not encourage kissing, hence a no contact policy for talent during the filming of scenes will be the new normal," Muvhango line manager Leo Phiri said.

Muvhango will resume production on Monday with cast and crew such as Buhle Samuels, MacDonald Ndou as well as Gabriel Temudzani expected to "now operate under self-catering measures during the Covid-19 duration as to afford the new normal."

Meanwhile, Generations: The Legacy confirmed to Sowetan that Gadaffi (Vuyo Dabula) will not be smooching any of the show's leading ladies in the foreseeable future.

Furthermore, the show will be scaling back on extras and using creative camera tricks in an effort to give the illusion of intimacy on screen.

The SABC1 soapie plans to isolate its cast and crew that include Rapulana Seiphemo, Vusi Kunene and Manaka Ranaka into groups when they resume production.

"There won't be any kissing or intimate scenes. Actors will practice social distancing on set and camera trickery will be used to make them appear closer together," Generations: The Legacy spokesperson Nandipha Pantsi said.

"The overall plan is to keep the cast and crew on set very small. The production team will be divided into three teams of no more than 12 people," she said.

SABC acting spokesperson Mmoni Seapolelo said: "Production houses are
independent of the SABC and can restart productions as and when they are ready to
comply with the regulations..."

There won't be any kissing on e.tv's soapies as well, says commercial channel's MD Marlon Davids. The station's daily dramas Rhythm City, Scandal! and Imbewu: The Seed will resume filming during the course of the week.

"Scripts will be adjusted accordingly without compromising any storylines," Davids said.