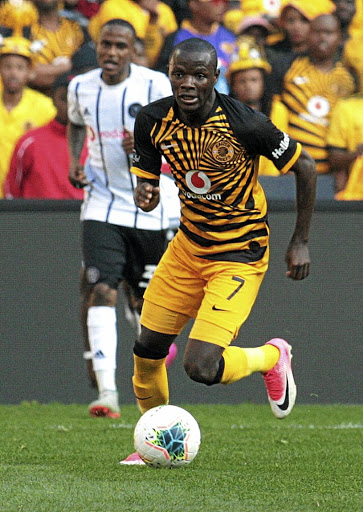 Lazarous Kambole, the recently acquired Kaizer Chiefs forward, is of the view that the Amakhosi faithful have not yet seen much of what he is capable of.

The Zambian international has had one of the warmest receptions from fans since his debut in the 3-2 victory against Highlands Park and his second match, against Black Leopards, which Chiefs won1-0.

After making a remarkable maiden appearance against Highlands Park, Kambole says he is pleased with how things are shaping up.

"It's all as a result of the hard work I have put in so far. I realise I've had a great start to the season but the inspiration comes from everyone at the club for me to play good football," said Kambole.

"The support I've received from everyone has been great but I know I have to make a contribution, everyone has to do their bit and I'm doing mine.

"The season is still new. We still have a long way to go but I'm happy with my work [rate] and the fact that the reception from the fans has been good."

The former goal poacher at Zesco United, in the Zambian Super League, alluded to the reasons why he decided to move to South Africa and play for Chiefs.

"There's no doubt that Chiefs have a rich history, they play good football but, most of all, players who are in SA get regular call-ups to the national team."

A man of few words, Kambole, 25, won two league championship titles with Zesco and is believed to have cost Chiefs R3m to lure him from his small town of Chingola in Zambia.

Before joining Zesco, Kambole was on the books of Konkola Blades, where his football career took off in a big way.

Zesco noticed him when his side faced Nkana in a league decider three seasons ago.

He said on the Chiefs website: "I scored the only goal of the match, that attracted the attention of Zesco United. It was then they recruited me and I didn't hesitate to join them.

"It was a big career move for me."

Kambole has penned a three-year contract with Chiefs, and hopes all of it will be about playing regularly and scoring.

With Amakhosi entering the 2019/20 season after a trophyless four-year spell, much is awaited from the tiny striker.