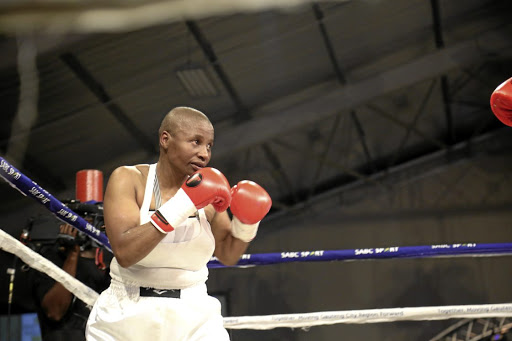 Noni Tenge will fight in front of her home fans in Mdantsane for the first time since 2013 on Sunday.
Image: Roderick Mulungana

Every August gallant female fighters come into full bloom in a month that is celebrated as theirs.

Female fights are scarce, despite Boxing SA's (BSA) plea to promoters to include one or two female boxing bouts in their tournaments.

WBF president Howard Goldberg has always been supportive of BSA's initiative and he has made it possible financially for promoters to stage or include WBF championship fights in their tournaments.

Throughout its existence in SA, the WBF has adopted the drive to increase women's participation in boxing as a flagship project.

The history of boxing is replete with legacies of heroines who have excelled in their weight divisions. The names of elegant fighters like Noni Tenge, Bukiwe Nonina, Matshidiso Mokebisi, Nozipho Bell, Ndobayini Kholosa, Gabisile Tshabalala and Unathi Myekeni loom large.

While Tenge's junior middle-weight strap will be on the line against Mapule Ngubane at Mdantsane Indoor Centre today, Nonina will defend her bantamweight belt against Frenchwoman Hamira Hamzaoui next Saturday at Sterkspruit in the Eastern Cape.