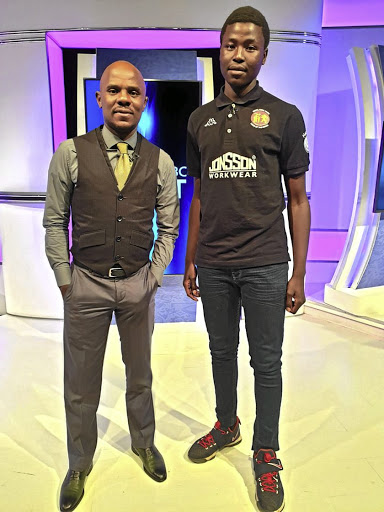 Kwena (pictured) left sports host Thomas Mlambo stunned during his show last week when the youngster, who calls himself Poison, revealed that he has never seen footage of his late father in a competitive football match. He also revealed that he had signed with the Lions of the North.

Mlambo had shown snippets of the late marksman doing what he was known for, rattling the net. Manyathela helped the Buccaneers clinch the 2002/03 league title, scoring an incredible 48 goals in 73 appearances. He was the league's top scorer in that year.

Later in 2003, Manyathela was involved in a car accident that resulted in his death, on his way to his home town of Musina. As a sign of respect for the marksman, Pirates retired his jersey, No 22.

The soft-spoken star was 21 at the time of his death and his son was four.

Highlands Park director Sinky Mnisi explained that Manyathela is not yet a senior team player but will wear jersey No 22.

"The development coaches, under the tutelage of the head of development, coach Les Grobler and coach Owen Sutton, have been following and moulding his talent and recommended him for an apprentice contract this season," said Mnisi. "He's not part of the senior team that is on a pre-season camp."

Mnisi said they would unveil their new signings in the next few days.

"It has never happened before that a player unveils himself after signing with the team. He's still very young and, understandably, may have been a bit overwhelmed.

"He is a player for the future, but we wouldn't want to kill his career before it even takes off by throwing him into the deep end," said Mnisi.