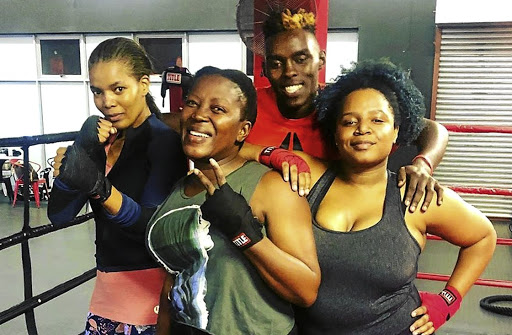 Xolisani "Nomeva" Ndongeni has successfully beaten Johannesburg's capitalist system which has messed up a lot of boxers who had relocated to the City of Gold with dreams of striking it rich.

It is daunting for a boxer whose sole source of income derives from being active inside the ring to find their footing in Jozi when they know no one.

Even when squatting with friends becomes difficult because they could easily get tired of providing food and shelter.

That is why some boxers get involved in crime while others resort to the bottle.

However, Ndongeni realised he had to do something extraordinary to avoid life's booby traps by becoming a personal trainer. That paved way for his success.

The boxer who hails from the sleepy town of Mount Frere, Eastern Cape, is not skilfully the greatest in his field, but his mental fitness turned him into a successful entrepreneur who uses his acrobatic skills to live a luxurious life.

Ndongeni relocated to Johannesburg in 2015, but the promises of a better life as a boxer are yet to be fulfilled.

He spent his early years as a boxer in Duncan village where he has a house.

Ndongeni boasts the charisma that enables him to fill to capacity the 25,000-seater Orient Theatre.

Xolisani Ndongeni warned before jetting out to the US last week that he did not join the fistic sport by default.
Sport
2 years ago

This free-spirited young man also uses his bright and unpretentious smile to soften even the toughest of hearts.

Little or no fighting skills at all, but armed with the love of training hard, Ndongeni has become an overnight celebrity after exploiting a full-time position of being a regional manager of the Fight Club Fitness Gyms.

Among his clients are celebrities who include seasoned television actress and successful business woman, Connie Ferguson and actress Rami Chuene.

Ndongeni is based in Fourways where his boxing trainer Sean Smith owns a house. But he has already bought his own house at Riverside View.

He said that Chuene (who plays Gracious in The Queen on channel 161) approached him to train her.

"Through her good heart, she later introduced me to Connie, and I was later joined by others from the same drama," said the former SA and WBF International junior lightweight, SA, IBO International, WBA Pan African, IBO lightweight undefeated champion, this week.

"They are very nice people and that is why I don't mind at all dedicating my time training them despite being the manager.

"Look, I get a monthly salary from Fight Club and I could not be happier than I am in my life right now."

Ndongeni says he is able to put food on the table for himself, his "full-time" partner, also providing for his two boys while waiting for a boxing match.

He drives a top-of-range Toyota RAV 4 which he received from his security solutions and technology sponsor.

"They take care of my petrol and maintenance," he said without mincing his words.

The boxer's other sponsor, which is from the construction and mining sector, also pays him monthly.

"It will be real unfair of me to say I am suffering. The city of Johannesburg gives you what you want, you just have to be disciplined otherwise the bright lights will stray you," warned the boxer whose last ring appearance was in America in January against that country's hot prospect, Devin "The Dream" Haney from the Mayweather gym, owned by the flamboyant retired boxer, Floyd "Money" Mayweather.

In his boxing career, Ndongeni suffered a points loss for the vacant WBC International and WBO Inter-Continental titles in what was his first loss against 25 straight wins.