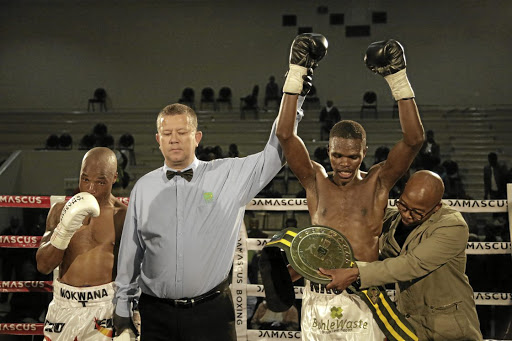 Pleasant emotions were expressed in various forms inside and outside the boxing ring at KwaThema Civic Centre, Springs, where new boxing promoters - Fana and Elias Tshabalala of Fantastic 2 Promotions - staged a tournament in honour of fallen heroes Simon Skosana and Themba Zulu.

Skosana was an SA bantamweight champion, while Zulu was a trainer. They are both from KwaThema.

Boxers Mxolisi Nombewu, Clever Mdingi and Smangele Hadebe whose bouts on Sunday formed part of the tournaments were trained by Zulu. They paid tribute to the Tshabalala brothers for featuring them in a tournament to honour their departed mentor. Zulu's wife was a ringside guest.

To add to this emotional perspective, former professional boxers and brothers Peter, Patrick and Vus'umuzi Malinga who are responsible for the career of newly crowned SA lightweight champion Ayanda Nkosi dedicated their first national title to their late father Jabulani Malinga who died in 2013.

Jabulani trained his sons until Peter, the former SA, WBU and IBO welterweight champion, retired to assist him in the corner. Patrick, the former SA lightweight titlist, and Vus'umuzi, the SA bantamweight holder, quit when Peter was their main trainer.

Patrick trains amateur boxers and he unearthed Nkosi. Vus'umuzi is the manager of all boxers at JD Malinga Gym in Katlehong, Ekurhuleni.

"Our father is happy wherever he is," said an emotional Peter. "We dedicate this title to him."

Nkosi dethroned Thompson Mokwana with a stunning sixth round stoppage, winning the title Patrick lost to Mokwana in 2011.

"I was still an amateur boxer when Thompson defeated Patrick. I prayed that he lasts longer as the champion until I turn professional with the intention to avenge that defeat - we've done it today and I am excited," said the hard-hitter who has six knockouts in 12 wins against a loss.