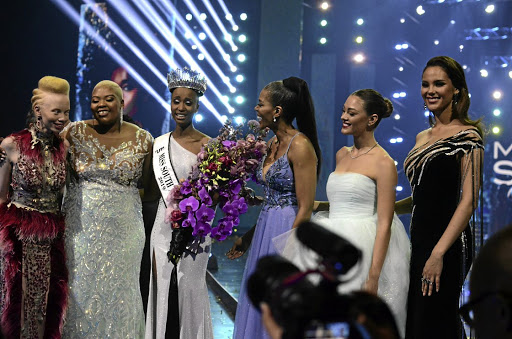 Zozibini Tunzi, centre, who was crowned Miss SA on Friday night, is congratulated by the judges - Thando Hopa, Anele Mdoda and Connie Ferguson.

Newly crowned Miss South Africa Zozibini Tunzi wants to use her reign as Mzansi's most beautiful woman to give hope.

Tunzi, 25, snatched the title during a glittering event held at Times Square Sun Arena in Menlyn, Pretoria, on Friday night. It was her second attempt.

"With this title, I am really hoping to touch lives," said the public relations graduate who works for top PR firm Ogilvy in Cape Town.

"Miss South Africa is always there to give a little bit of hope, I am looking forward to that. I want to be remembered as someone who tried. To be that person who was always willing to give her best.

"I am glad that I am now in a space where I can make a change. I can't wait to do that. I don't know where I might be needed but I am hoping that wherever I am, I will do great," Tunzi said.

Tunzi, from the small town of Tsolo in the Eastern Cape, said that she was looking at meeting different people in the next 12 months of her reign to broaden her horizon.

The 61st Miss SA said she was glad that things did not turn her way two years ago when she entered for the pageant.

She said she did it for wrong reasons in 2017 and was now more ready and prepared as she understands her role in society much better.

"I entered in 2017 because I was financially excluded from varsity. I was doing it to sooth that pain. I was just looking for something to pick me up because it was a difficult time. I am not the same person that I was back then and also, really, the purpose shifted."

One of the notable changes about Tunzi was that she wore her natural hair this year as opposed to a weave back in 2017.

"I will say that it was a conscious decision to keep it coming into the competition. A lot of people had already asked me if I would change my hair and I said that I didn't see any reason for me to change myself before coming into a competition. I really want to spread positivity and that should begin with me.

"I can't tell people to love themselves and to be themselves 100% of the time if I am not that woman. I definitely had to stay true to myself throughout the competition.

"Not to say that women who wear weaves are not true to themselves. I always want to emphasise that women are multifaceted. You can be whatever you want to be, whether it is in a weave or short hair, as long as you are comfortable.

It is not really about how we look, but it's about the impact that we have in society."

One of the most pressing assignments awaiting her is to get her driver's licence since a brand new Mercedes-Benz was among her R3m prize hamper.

"I still have to get my drivers licence. So I won't be driving the car, which is quite sad but it is motivation to get the licence soon."

A luxury apartment in Sandton was also among her prizes.