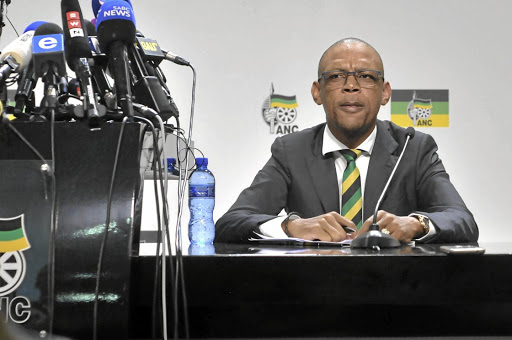 After explosive allegations of sexual harassment in hotel rooms by his personal assistant, ANC spokesperson Pule Mabe presented his version of events about what happened in his affidavit at the ANC's disciplinary hearing this week.

Mabe denied the allegations in the 10-page affidavit.

Earlier in the week, Mabe's accuser detailed allegations in a 14-page letter sent to ANC deputy secretary-general Jessie Duarte of how Mabe allegedly came into her hotel room twice, at St George's Hotel in Pretoria and in another incident in Limpopo.

In his extensive affidavit Mabe revealed he was in the complainant's room at St George's but he was always with other people.

He places a prominent Gauteng provincial leader and a delegation from the Congress of South African Students (Cosas) as witnesses as he said they were also in the room with him.

" ...I was assisting the so-called 'Gauteng leader' with the preparation of an official ANC document on his laptop in the complainant's room," reads his affidavit in part.Mabe denies setting foot in her hotel room in Limpopo." This complaint is nothing more than a cynical and duplicitous attempt to exploit the pain of people who have actually suffered through real cases of sexual harassment," he said in his affidavit.

According to Mabe, the reason behind the woman's accusations was because he asked her to provide proof of qualifications mentioned in her CV, which she doesn't have.The woman stated that she obtained a diploma in public relations from Varsity College and a higher certificate in business management from Regenesys Business School.But Varsity College wrote a letter to the ANC disputing that.

The college's Sibongile Nqini confirmed to Sunday World that they wrote the letter. "The student did not complete or graduate from the IIE diploma in public relations," reads the letter in part. Regeneys also wrote a letter to the party and poured cold water on the woman's claim. The letter, which was written on December 20 reads in part: Qualification in progress."

A Regeneys employee, who only identified himself as Mike, confirmed the woman did not complete her course at the institution. Mabe's lawyers used the letters to repudiate her claims and portray her as someone who wanted to divert attention from the embellishment of her qualification.

The much anticipated internal enquiry of ANC spokesperson Pule Mabe and his former personal assistant got under way yesterday.
News
3 years ago

The woman, 26, sent a grievance letter against Mabe to Duarte last month accusing him of sexual harassment, cutting her salary to R15 000 and emotional abuse when she spurned his sexual advances.In the letter the woman explained how she became Mabe's PA at Luthuli House without going through a job interview, saying Mabe informed her verbally in July that she would start her new job in August.

"... I studied public relations at the IIE Varsity College but my challenge was that I can't at the moment present my qualification as I have a huge academic debt that I am still paying off ...," said part her affidavit.

She detailed how before she officially commenced her duties, Mabe booked a room for her at the St George's Hotel under the guise that the two would be doing work for the ANC.

She said on the first night, Mabe came to work in her room and at some point asked her to sit closer to him. On the second night, she said, Mabe insisted he work on his assignment in her room but slipped into her blankets after she fell asleep.

ANC spokesperson Dakota Legoete said he was unable to comment because Mabe’s disciplinary hearing was still under way.

“We expect the hearing to be completed by the first fortnight of January, and until then we cannot say anything about it,” he said. The woman accusing Mabe of sexual assault said she could not comment further on the matter until the inquiry into the sexual harassment concludes.

“We must wait for the process to be concluded, then we will pronounce ourselves,” she said.

A GENDER ACTIVIST WEIGHS IN

Commissioner at the Commission for Gender Equality, Mbuyiselo Botha, says during a time when we recently commemorated 16 Days of Activism, it’s more evident that South African men are still in a position of power oblivious to them.“Men are in a privileged position and often abuse their position of power. Some do it unconsciously, so as men we all need to take responsibility,” he said. Botha also noted that Mabe going on special leave reflected badly on the ANC as they should’ve suspended him immediately instead.

“This does not in any way say that he is guilty, but rather that they regard the matter with the seriousness that it deserves.“However, they did well by offering the accuser counselling,” Botha said.