Tests of fitness for marathon infringes on my right to run 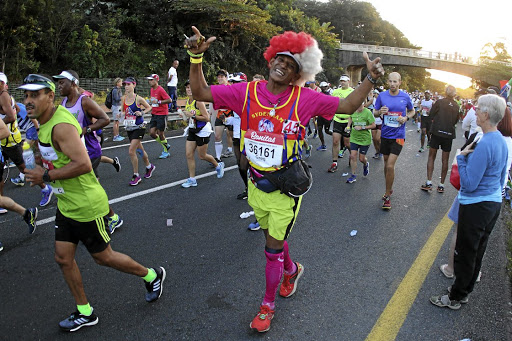 The writer thinks that inhaling teargas proves beyond reasonable doubt that he is a comrade.
Image: Anesh Debik/Gallo Images

If you switched on your telly now, you might catch a glimpse of me. Yup, I'm running the "Ultimate Human Race" this year, despite the organisers' insistence that I don't meet the criteria.

For years I've filled in the forms to join mankind in this test of endurance but the Comrades Marathon Association (CMA) always persists with doubts around my fitness or lack of it. Apparently, you need to participate in myriad mickey-mouse half-marathons to qualify for the Comrades. This does not make sense to me and I believe it infringes on my right to run.

I have written to the CMA countless times that I was fit as a fiddle. They insist that lack of fitness can strain the heart but everybody knows my heart survived a head-on collision with a truck only last year. After 10 hours of surgery, it's as good as new despite the cable ties that hold the valves and aorta together.

The CMA also refused to acknowledge the thousands of trips to the fridge to retrieve a cold beer as adequate exercise.

In my book, I thought inhaling teargas proved beyond reasonable doubt that I was a comrade. I had a mean katty in the 1980s as any apartheid policeman can attest. It is not my fault that when I was about to go into exile in my teens, FW de Klerk sprung a surprise and released Nelson Mandela and everybody came back home.

I was beginning to suspect that the CMA was too polite to tell me that limper creepers like me were not allowed to participate. That was until I read the inspiring story of Xolani Luvuno in last week's Sunday World. The 34-year-old amputee had been training hard to run the 90km from Pietermaritzburg to Durban.

His tale convinced me that I could also do it, registered or not. I have never known the meaning of quitting and you can ask the girl I courted for two years in my teens.

I am running the Comrades today despite registration odds stacked against me. And by running, I mean jogging, walking but mostly crawling. I estimate to finish the race in three weeks time but I never claimed to be Bruce Fordyce.

I will also spare the CMA the trouble of sipping their cool drinks on the road as I've brought my own six pack of beer, dried fruit and biltong.

My beautiful friends Boniswa Tshiqi and Bridget Hilton-Barber are waiting for me with a medal bought from a pawn shop when I eventually finish.

Oh, I'm not sure whether I mentioned that I am running the race in the opposite direction to keep out of the way of the registered pack. I'm running mine from Durban to Pietermaritzburg.