Snacks and beer on tap for this World Cup couch potato 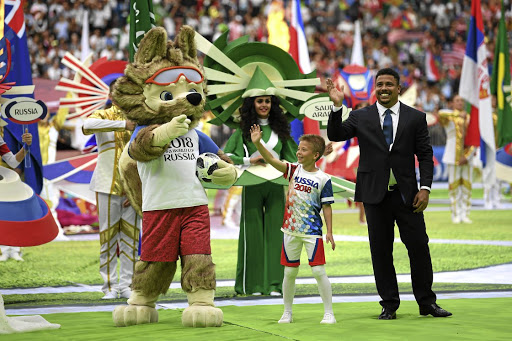 Former Brazil player Ronaldo cheers the fans with the 2018 Fifa World Cup Russia mascot Zabivaka the Wolf prior to the opening match in Moscow this week.
Image: Matthias Hangst/Getty Images

The greatest show on earth kicked off in Russia on Thursday. I half expected to see Zakumi, the 2010 Fifa World Cup mascot sashay onto the opening ceremony and do the vosho.

Alas, the last time the Diski Dancer was seen he was smoking nyaope in Marabastad, Pretoria. Like most of us, the dejected mascot did not take kindly to Bafana Bafana's continued decline. I retired my vuvuzela after we became the first World Cup hosts in history to bomb out in the group stages.

In disgust, I also used my Bafana shirt to wash my jalopy but it failed to wipe the surface clean, so I gave it to my neighbour's dog. Like most of you and the brilliant Percy Tau, I'm watching the World Cup from the comfort of my couch.

According to my un-sober analysis, Bafana will only feature in the tournament when we host it again 154 years from today. Our capitulation to Cape Verde, and recent thumping by Madagascar have convinced me we have no business being on the pitch. How can you lose against an island the size of Vuwani and still reckon we are a force to be reckoned with in football stakes?

We may have the best stadia but we cannot locate the goalposts. Our boys have certainly lived up to their tag: a bunch of losers as former sports minister Fikile Mbalula once called them.

On the bright side, I managed to convince a brewer to park a trailer near my gate for the duration of the extravaganza. An IV-beer drip would have been perfect but my doctor had me under 24-hour surveillance when I requested it in the intensive care unit last year.

The trailer will ensure a steady supply of copious amounts of alcohol and save me needless trips to the bottle store when I should be watching soccer.

With the price of a litre of petrol now equal to a quart of beer, nobody should be behind the wheel. The only people who can afford driving around these days are government ministers and cash-in-transit thugs.

The only thing I'm missing is a catheter to spare me frequent trips to the bathroom but otherwise I'm all set with snacks and listeria-free cold cuts. The World Cup is the only time the man of the house can monopolise the remote control and the opportunity only comes around once every four years. Generations can fly out of the window for all I care. I cannot afford to miss the cannibal of Uruguay, Luis Suarez, sinking his Dracula molars into the neck of an opponent because of Uzalo.

I know there's action replay but I want to experience the bite in real time, like the bitten. I have not yet settled on which country to support but I've learnt a few Spanish and Nigerian swearwords to lob at the opponents.

Here are 6 big moments from the opening week of the 21st Fifa World Cup tournament being held in Russia. The World Cup kicked off in Moscow, Russia, on Thursday June 14 2018.