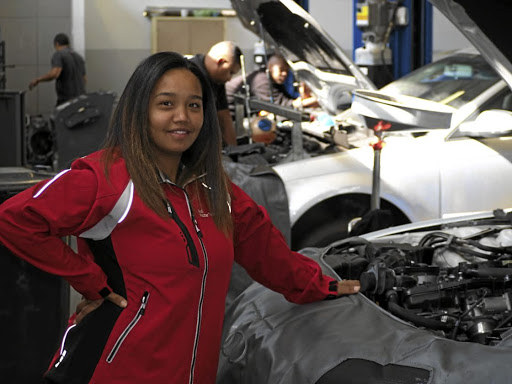 Twenty-five years into democracy and these brave women are flourishing on the wings of freedom. They have not only taken on male-dominated industries - but have owned it, writes Somaya Stockenstroom.

Chelsea van Wyk is SA's first and only female master technician working at Audi, Somerset West in the Western Cape.

Surprisingly, van Wyk says she was never interested in cars as a child or had the slightest clue what being a mechanic entailed. She doesn't regard herself as a "tomboy" either.

The 25-year-old, who was born in Eerste River, excelled in various sports. She was set to study physiotherapy but came across an ad for an Audi apprenticeship.

"I thought, if I can work and study, wouldn't that be great? So knowing absolutely nothing about cars, I applied anyway."

When she went for the first interview she was told she didn't fit the profile they were looking for.

"It wasn't a big deal. I fell into my studies, but lo and behold, one month after settling in, the manager of Audi called me and asked if I was still interested. I dropped out of university and signed up immediately."

She graduated in October last year. But her journey started in 2012. She had to complete certain courses to first qualify as a technician.

During this time she fell in love and says her partner was passionate about everything concerning cars. His love rubbed off on her as she learnt more about the trade from him.

van Wyk went on to study for her Audi master and diagnostic technician courses - and did it while pregnant.

It's an intense programme over four to five years.

She says it's kind of like being a doctor of cars, as it covers everything from engine mechanics to engine management, transmission, air-conditioning, running gear and driver assistance systems.

van Wyk says the best aspect of her position is the problem solving and diagnostics.

She also says not all the work is computerised as some of it requires physical strength, such as removing the engine and replacing the parts.

"My family are supportive now. But my dad wasn't too thrilled at first with my choices. He's into sport and growing up I played everything from soccer to netball and [took part in] athletics. You can imagine his disappointment at first.

"But I believe we're guided to where we are destined to be. I am a go-getter and I never think I will fail, no matter what I set my mind to. It's just the way I'm built," she says.

Currently on maternity leave after giving birth to her daughter Emma, she has hopes and dreams for her to achieve even better than she has.

And when it comes to her male counterparts, she speaks of them with high praise.

"If anything, they always offer a helping hand. They have never intimidated me or gave me a hard time because I am a woman. In fact, they respect my opinion because they don't see me as one of them, but someone who has worked just as hard as they did to get here," says the confident van Wyk. 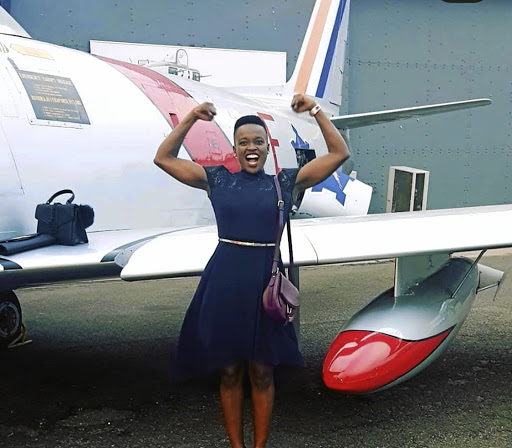 Mandisa Mfeka is the envy of many as she takes on big flying machines as SA's first combat female fighter pilot in the National Air Force.

The 29-year-old, now a Major, dreams of one day flying the Gripen. As a math and science whizzkid, she thought she would end up in a medical career. But her adventurous spirit kept niggling at her, urging her to seek something more exciting.

She attended air shows at Virginia Airport, about 10km northeast of Durban, with her parents as a young child and remembers the joy she felt.

Born in Durban, she attended an all-girls school, Queensburgh. It was at the age of 15 when her uncle handed her reading material on careers in math and science that she came across aviation by the SA Air Force (SAAF).

"When I saw what requirements were needed to become a pilot ... I had surpassed them. I couldn't contain myself that this was actually a possibility.

"But finding further information about applying became an almost impossible task. I was only successful in Grade 11 after visiting various people from the airport to the SA National Defence Force (SANDF) that I finally received application forms to become not only a pilot but a fighter pilot."

This month marks 25 years since we attained our freedom. It is something to be proud of. The transition from apartheid into a democratic society has ...
News
2 years ago

The problem now was telling her parents what she has decided to do with her life. "They, as well as my teachers, were naturally scared for me. Because I am a girl, I guess. But because I was determined, they allowed me to. And I had to do it immediately because you can't become a pilot after 22."

She joined the SAAF in 2008 and two years later she started at Central Flying School in Langebaan, just outside Cape Town. By 2011 she had earned her wings, had to undergo rigorous military training and another four years to reach combat status.

"Although I was into sports at school, such as soccer and karate, I couldn't do a pull-up. But I pushed myself by starting with push-ups, and now I can do plenty pull-ups. You have to be not only mentally strong but physically too to handle the jets.

"Also, all the loops and turns and force from gravity take strain that need you to be prepared for. I spend lots of my time eating healthily and working out to become even stronger. We are also subjected to a bi-annual fitness test."

When it comes to being the only female surrounded by males, she admits it took some getting used to. "I've always been around girls, so the culture and lifestyle was different and something I had to adjust to."

Mfeka looks forward to showing off her skills at the Presidential inauguration ceremony next month.

Protector of the seas 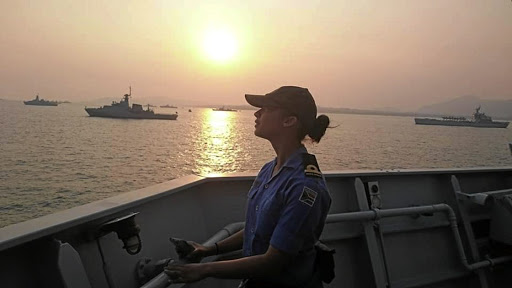 Gillian Malouw enjoys her career as a submarine officer.

Port Elizabeth-born Gillian Malouw is the first female submarine navigator in the South African Navy at only 28-years-old.

Having grown up in PE's Nothern Areas neighbourhood of Schauderville, she joined the sea cadets during grade 7.

"My aunt suggested this to my mother. Her children (the now Lieutenant Commander Nsibande) had already been members for a while and they enjoyed it. I enjoyed it too, met lifelong friends, and was a member until I completed grade 12.

"The sea cadets help nurture qualities such as leadership, discipline and overall confidence. Cadets are taught about the navy and other careers in the maritime industry. I was attracted to being at sea and also wearing the uniform," she says.

Two years after completing matric at Schauderville, she left her hometown for Saldanha, Western Cape, in January 2010.

This was where her basic love of the ocean would become her reality as she began her basic military training (BMT).

"In March of that year, I passed a week-long selection for the Military Training for Officers (MTO1) course in Gordon's Bay, as a combat officer candidate.

It involved a great deal of physical training. I was not very fit when I joined the navy, but had a bit of an idea of what to expect. The daily training sessions and evaluations all helped me.

Not yet uhuru for most jobless youth

Doom and gloom after 25 years
Lifestyle
2 years ago

"In January 2011, I started studying full-time at the military academy towards a bachelor's degree in technology and defence management. I graduated in December 2013."

"My path towards becoming a combat officer started. I was on the Combat Officer Qualifying Part 1 course, for an introduction to navigation and warfare.

"Without a doubt, I volunteered to join the submarine service. I qualified in November 2016."

" I returned to the submarine squadron and was drafted to SAS Queen Modjadji I, to start working on my submarine qualification.

"I went through the various phases of the qualification for combat officers on our submarines, and finally qualified in December 2018."

She functions as an officer of the watch at sea.

The 11-year-old ballerina is raising funds for trip.
Lifestyle
2 years ago
Next Article