As the country celebrates 25 years of democracy, SowetanLIVE brings you a compilation of stories around this momentous occasion (click on pictures to access articles). 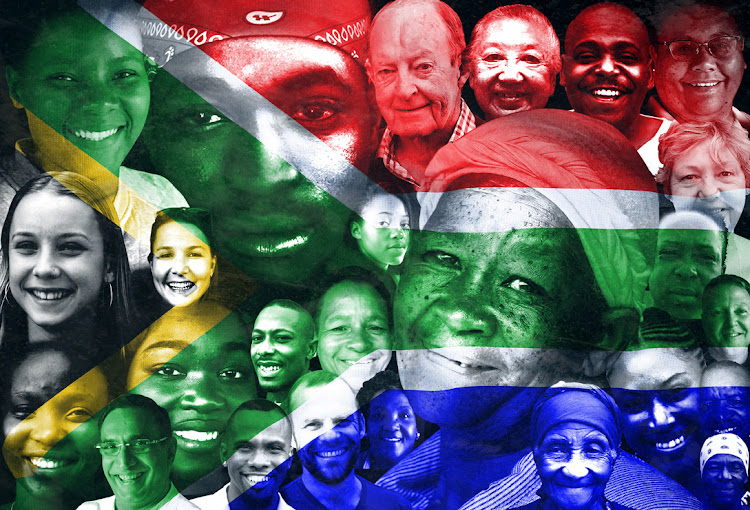 This month marks 25 years since we attained our freedom. It is something to be proud of. The transition from apartheid into a democratic society has largely been a success.

We may still have some rabid racists in their khakhi shorts irritating us with their "orange-blanje-blou" flag at some rugby matches and "cultural" rallies.

We may get power mongers who mobilise political support by exploiting our ethnic and linguistic differences. But the concept of South African nationhood is universally accepted.

Eleven people sat down after New Year's Day in 1994 and faced the most difficult task of organising SA's very first democratic elections.

There was no budget, no staff to work with, little experience but just determination to make it happen.

Justice Johann Kriegler, who was appointed to head the first Independent Electoral Commission (IEC), was one of those people.

Democracy is a foreign word to Malifu Motinya as her life has not changed since SA had its first democratic elections in 1994.

Motinya, 82, who stays in a shack at Ramaphosa informal settlement outside Reiger Park in Boksburg, Ekurhuleni, has been waiting for a house for 25 years.

Her shack does not have electricity, running water and a toilet. She still uses a paraffin lamp and a gas stove for cooking.

"What is this democracy you are talking about?" she asks.

Around the time of Jacob Zuma's second election, conflict and contestation raged in public discourse. At the time, voters grappled with the idea of the individual versus the organisation.

Particularly stark is the memory of a prominent singer and activist who was very vocal about her attempts to reform the ANC from within. She proudly exclaimed that she didn't believe in Zuma but the ANC, hence her vote was for the organisation and not its president.

I imagine many people at the time voted with this kind of cognitive dissonance.

If anything, the contestation of the Zuma era catalysed a political vigour and interest among the electorate that the previous eras seemed to have lulled. Before the entrance of the EFF into parliament, South Africans had much less interest in interrogating the state of our democracy.

Electorate is now keen to quiz state of our democracy

Just a stone throw away from Steyn City, one of SA's wealthiest suburbs, lies Diepsloot, an ever-growing post-apartheid township that is home to more than 400,000 people.

The Johannesburg northern township is a hive of activity on any given day. Taxis enter and leave on the R511 at sporadic intervals. An informal traders market lies on the periphery of the township - ushering visitors into the bustling location.

"It wasn't always like this. This place was just a piece of unoccupied land before 1995," explains Madlozi Ndlazi as he muses over Diepsloot's rapid population growth over the past 24 years.

There is no way kwaito's golden era can be mentioned and not drop Kalawa Jazmee Records in the mix.

The independent record label, throughout its 25-year rich history, has been the mirror of our own joyride through pop culture - an unapologetic blast of kasi power.

The evolution of Kalawa Jazmee

The state's tender system and black economic empowerment policies have led to the creation of black millionaires and a few billionaires in the past two decades without really transforming the economy.

Economic transformation is still one of the most daunting challenges faced by SA - 25 years into democracy.

Despite several laws, regulations and guidelines to ensure government procurement becomes a tool the state could use to help transform the economy and propel black companies and business people into the mainstream economy, it remains largely untransformed.

In the days leading up to the first democratic elections in 1994, it was almost obvious that most black people were going to vote for the ANC.

The party, which held hopes of freedom from oppression for many, knew it had the elections in the bag.

This was mainly because it was one of the very few parties whose vision for SA resonated with citizens.

Not in 2019, where the 25 years of democracy has seen the emergence of many political parties - 48 to be exact - it is not clear where majority of the votes are going.

On April 27 1994, this newspaper had, on its front page, a simple but profound headline: "FREEDOM in our lifetime"

It was a celebration of the day on which South Africans for the first time voted in a general election as a free people and as equals.

The headline also paid tribute to thousands of people who, for decades, had struggled to make the day possible. For, since the Defiance Campaign of the 1950s, Freedom In Our Lifetime was the war cry of freedom fighters.

Rhodes University is one of the institutions that have been at the centre of the transformation debate. This was evident in 2017 when after 115 years of existence, the students demanded the renaming of the university.

The institution's vice-chancellor Sizwe Mabizela said the community of the university council decided to retain the name.

"The council decided that the university will continue being known as Rhodes University. However, the issue of transformation has been very broad at our university and there are various dimensions to look at - student population in terms of the demographic representation our university has transformed significantly. The majority of our students are black and black African. I think we have made significant progress in that regard," Mabizela said.

Changing face and character of SA varsities
Next Article