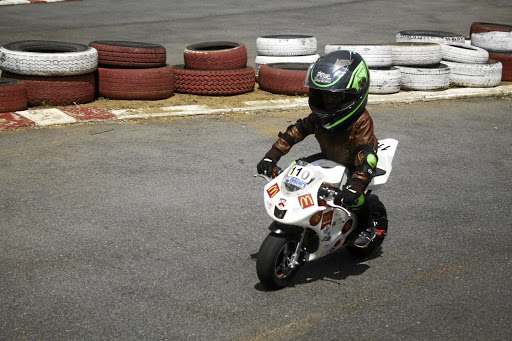 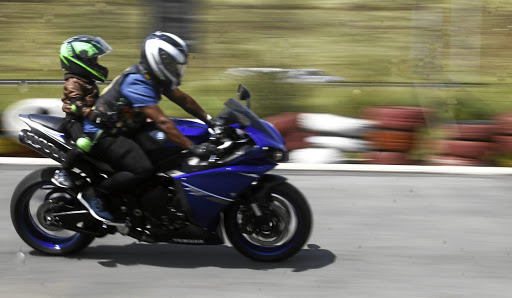 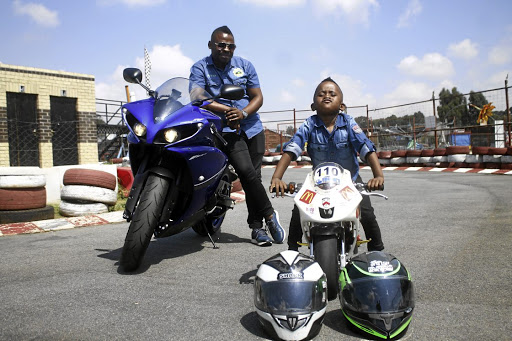 It's a Friday afternoon at Uncle Charlie's go-karting race track.

He is clad in black jeans, brown leather biker jacket and lime green knee and elbow guards and helmet.

Before take-off, his father Zenzele pulls a lever at the back of the bike to give it a power boost.

Fearless Bohlale shoots off like a bullet as Sunday World's photographer gives chase trying to get pictures.

This snapped chain left the young biker, whose race name is Littleman 110, sulking, with tears welling in his eyes.

He then refused to speak as he could not deal with the huge disappointment.

"I can rev my bike," he had boasted earlier.

Bohlale is one of the youngest bikers to regularly compete in the country.

Born in Cosmo City, west of Joburg, Bohlale took to the wheel when he was a toddler and has been riding for more than eight months. He has a clear vision of his career path; he wants to become a bike-riding firefighter.

Littleman 110 said he loves his bike because of its speed.

"My bike is fast and my favourite cartoon is Chase from Paw Patrol," he said, referring to the German shepherd cartoon character, who is a traffic cop and spy dog all rolled into one.

Littleman 110's love for motorcycles comes from his father.

A 10-year-old biker who stole the show at the 107th ANC manifesto launch in Durban on Saturday aspires to be an international star.
News
3 years ago

Bohlale was born on October 1 2014, which is where his name Littleman 110 is derived from.

"When he was born, there was already a bike at home. When he started talking, I would take him around on the bike or when he hears me coming from a distance I would find him waiting for me at the gate," he said.

Mafokate had promised Littleman 110 a pocket bike, which is a motor-controlled bike that is fuelled by petrol.

The promise was kept and Bohlale got his R2,500 pocket bike in July and has never looked back.

Mafokate told Sunday World that he then took Bohlale to an open park in his neighbourhood where the two bonded while riding the bike.

"He was sitting on top of the bike and as I was pushing him around. I'd tell him to brake and instruct him on where the front and rear brakes were.

"He just revved and took off," he said.

The Mafokates are known to be a biking family and his mom and three siblings aged between 12 and 19 have also embraced the hobby.

"We are partners in crime when it comes to biking," said 44-year-old Zenzele.

The four-year-old has impressed at various racing circuits in the Vaal, Zwartkops and Polokwane.

His first competitive race was at the Zwartkops, south of Tshwane, last year where he finished seventh, and in Polokwane he came ninth, while in the Vaal he came 11th.

Last month, he came in the top three at Zwartkops and even received a trophy.

His latest race was last week where he came fourth, competing in a track in Polokwane, Limpopo. He is in a novice group with riders aged between four and nine.

His dad, who is an advanced driving instructor, said safety has always been a priority and that he was still looking for funding for full racing gear for Littleman 110 that should include leather jacket and boots.

"I went to go buy him a safety helmet, which is quite expensive for the little ones ... [I] later bought knee and elbow guards in case he drops," he said. "For now and even on race days he puts on long pants with a jacket. The boots must be something that covers the ankle."

According to Mafokate, the leather jacket and boots do not come cheap at roughly R7,500 and R2,000 respectively.