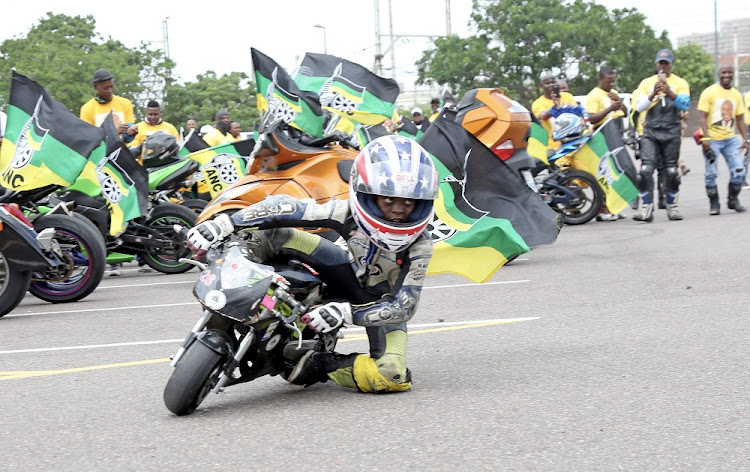 Oratilwe Phiri ( 10) entertains other bikers outside Moses Mabhida stadium where the ANC manifesto launch was being held.
Image: Jackie Clausen

A 10-year-old biker who stole the show at the 107th ANC manifesto launch in Durban on Saturday aspires to be an international star.

Oratilwe Phiri showcased his skills outside Moses Mabhida Stadium and had the crowd going wild.

"I want to be a very good biker. The best in the world, actually," he said.

Oratilwe, who attends Avalon Steve Jobs School in Johannesburg, learnt to ride motorbikes when he was five years old under the guidance of his father. He already has three championships to his name.

I want to be a very good biker. The best in the world

"My dad taught me to ride five years ago and I wasn't scared," he said.

"He is actually doing very well. He's a champion," he said.

Oratilwe said he practised on weekends but the intensity increased during the competition season.

Sometimes he competes against older kids who have had bikers in their families for generations.

The young biker was invited to Durban because of the skills he had showcased at a bike festival in Kyalami, Johannesburg, last year.

He said he loved the reaction of the crowd outside the stadium on Saturday.

"It was a huge crowd. I enjoyed it a lot," Oratilwe said.

He said he was excited about the year ahead because he would be moving onto riding motorbikes for adults and his first adult model will be the CDR 150.

However, his father Thabiso Phiri said it was an expensive sport because children outgrow their bikes.

A baby born at Durban's Addington Hospital on Tuesday January 8 has been given the name 'Khongolose'.
News
3 years ago

Phiri said they were in dire need of a sponsor for Oratilwe to reach his full potential.

"Our problem is mostly gear, race entries and travel costs. A lot of his bikes I've had to learn to fix as much as possible unless it's something big, then I take it to a mechanic," he said.

"I probably spend around R2,000 to R3,000 a month for Oratile alone to race. That normally doesn't include big bike repairs," he said.

"I especially want to bring this sport to the black community," he said.

The young biker said he will now be teaching his mom to ride a bike so that she too can join the family gang.