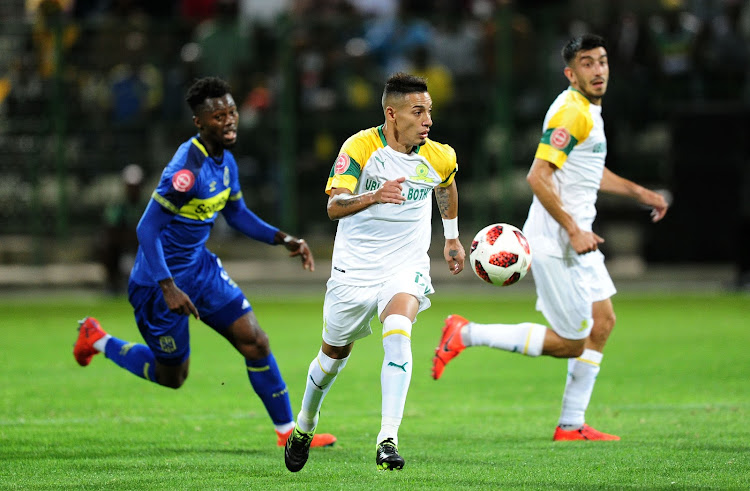 Cape Town City blew the Premier Soccer League title race wide open on Tuesday night, coming from behind, as has become their habit, to upend Mamelodi Sundowns 2-1 in their vital league clash at the Athlone Stadium.

New signing Christopher Davids, fresh from the Netherlands, hit a stunning freekick with his left foot to ensure a vital three point haul for his side with just two minutes left.

It was a grandstand finish that makes the title race most absorbing with two months left.

The win means City are just one point behind Sundowns, who have a game in hand but are beginning to look tired as the season heads into the business end.

A 14th minute goal from Lebogang Maboe had Sundowns ahead at half-time but Kermit Erasmus pulled one back soon after the break.

“Sundowns are the best in the league and they don’t make it easy for you but when the mindset starts to kick in, we can do the business,” said a victorious coach Benni McCarthy at the end.

Sundowns were on the front foot from the start of the game, winning the midfield battles and setting up chances as they sent out a clear message about their intent to win.

Tebogo Langerman was close to opening the score after just nine minutes but his effort blocked by Taariq Fielies, who slide in at the vital moment for a goal-saving tackle.

But Maboe had Sundowns ahead at the end of a direct move started by Hlompho Kekana, with a sublime forward pass from Emiliano Tade and Maboe just steered it wide of the goalkeeper.

City goalkeeper Peter Leeuwenburgh was caught flat footed as he came out and might have done better but was static as the ball just trickled past him and into the net. City’s first effort at goal took 22 minutes in coming – they looked a little tentative in the beginning and was a speculative effort from a near impossible angle from Surprise Ralani, that went straight into the arms of Kennedy Mweene.

But the hosts should have been level just two minutes later when Kermit Erasmus played a sublime through ball to set Siphelele Mthembu clear on goal but he fluffed the shot under pressure from defender Mosa Lebusa with just Mweene to beat.

In the 29th minute, Kekana played a clever ball over the top of the City defence that Gaston Sirino should have got to but the Uruguayan seemed to hesitate at the vital moment and missed out on a chance to make it 2-0 before half-time.

After the break, Erasmus pulled back in the 52nd minute after youngster Zukile Kewuti had powered in a header. City went onto the front foot as Sundowns began to tire and, at one stage, were forced to park a bus to keep City at bay.

Leeuwenberg kept Sundowns at bay midway through the second half with a brilliant close range stop to deny Langerman, who then fluffed another effort thereafter.

But when substitute Andile Jali gave away a freekick with his first touch, the stage was set for David to seal a famous home win.