Dicing with death - How Celtic's Letlabika was saved 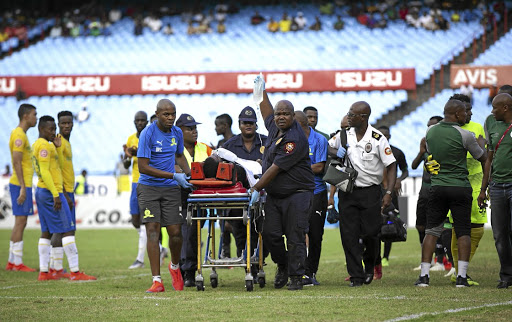 Wandisile Letlabika of Bloemfontein Celtic is stretchered off after being stabilised by the Sundowns medical team led by Dr Carl Tabane, left, following his serious injury at Loftus Versfeld on Saturday.
Image: Samuel Shivambu / BackpagePix

The life-threatening head injury suffered by Bloemfontein Celtic defender Wandisile Letlabika has brought to the fore the risk some clubs take in not having their own doctor at games.

Letlabika crashed his head against the goal posts in the goalless draw between Celtic and Mamelodi Sundowns at Loftus Versfeld on Saturday.

Fortunately, he was discharged from hospital in the evening with just concussion.

Phunya Sele Sele did not have a professional medic on their bench as they only had physical trainer Nkululeko Monaheng and physiotherapist Tebogo Sethunya. Sundowns doctors had to step in to prevent possible tragedy.

As the host team, Sundowns were obliged to deploy two doctors to the game. Dr Carl Tabane was the team doctor while Dr Paul Maphoto was the emergency doctor for the spectators.

Tabane and Maphoto intervened to avoid what could have been a disaster as Letlabika lay helpless in the goal mouth. Maphoto and the paramedics took Letlabika to nearby Muelmed Hospital where scans and tests were conducted before the player was discharged.

One of the medics, who is not authorised to speak with the media, said: "It was a close call. Had it taken 20 more minutes before being stabilised, the player would not have survived. I am glad we saved him and avoided a bad situation."

The PSL rule book makes it optional for the away team to bring a doctor to games.

"A visiting member club is not precluded from having its own team doctor, physiotherapist or paramedic in attendance at the match," reads rule 14.11.6.

Celtic coach Lehlohonolo Seema said: "The players had to switch on and do it for Letlabika so that it won't be like we started conceding after he left the game. I told my players that we must fight out there. I am pleased we remained compact and frustrated the defending champions."