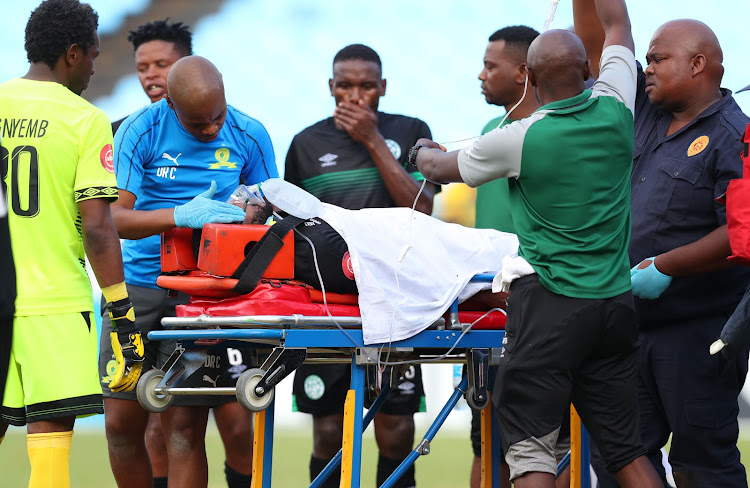 Bloemfontein Celtic defender Wandisile Letlabika is stretchered off the field after sustaining a serious head injury during a Absa Premiership 1-1 draw against Mamelodi Sundowns at Loftus on Saturday March 2 2019.
Image: Samuel Shivambu/BackpagePix

Wandisile Letlabika has been released from hospital following the horror head injury that left him unconscious during Bloemfontein Celtic’s goalless draw against Mamelodi Sundowns at Loftus on Saturday.

Celtic said Letlabika was treated overnight and there was no damage to the defender’s head or neck.

“Wandisile Letlabika has been discharged from hospital. Although his head injury was not fatal‚ he is booked off for a few days to recover fully‚” said the club.

Letlabika fell awkwardly and lost consciousness after first smashing his head on the ground and then rolling onto the goalpost as he came second best following an aerial clash with Sundowns captain and midfielder Hlompho Kekana on the stroke of half time.

The defender was treated for about 15 minutes by doctors before being taken off on a stretcher and transferred to a hospital.

The injury is a setback for Celtic as it rules Letlabika out of contention for their Absa Premiership clash against Orlando Pirates at Orlando Stadium in Soweto on Tuesday.

Celtic caretaker coach Lehlohonolo Seema said that Letlabika’s injury will not leave them thin at centre-back for their trip to Orlando.

"Anytime we can have players that can come and cover up there.

"We still have our captain of the MDC (Shadrack Kobedi) who can play there‚ we still have (Teboho) Kgasipe who is a centre-back‚ we still have (Mokoni) Mereko so those guys are still training with us from the MDC.

“So we are not worried‚” said Seema.

Celtic are on 30 points from 22 matches ahead of their clash against Pirates.

Mamelodi Sundowns coach Pitso Mosimane has cheekily claimed that he does not take the Premier Soccer League’s Q-Innovation seriously because his main ...
Sport
3 years ago
Next Article