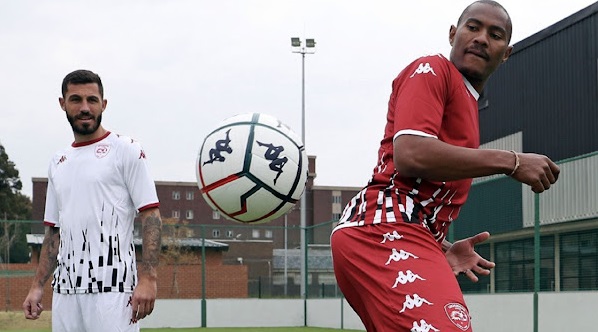 Daniel Cardoso and Prince Nxumalo are two of their more experienced players, modelling their new kit this week.
Image: Supplied

Having endured a baptism of fire in their journey into DStv Premiership football last year, Sekhukhune United are embarking on their second season in a much calmer demeanour, thankful they have a more settled squad and less off-field distractions this time.

Sekhukhune had an uncertain period last year after they won promotion, as Royal AM dragged the PSL to court over who should be the rightful National First Division champions. Eventually, Sekhukhune were found to have merited their automatic promotion but that period of confusion meant they didn’t have the best of preparation for what should have been their moment in the sun.

“There was just so much uncertainty that even when we tried to recruit players, they told us we don’t know if we are coming or going,” recalled Jonas Malatjie, the club’s CEO. “It became difficult as the court case dragged on, and we missed out on some of our targets."

Despite their troubled welcome to the Premiership, Sekhukhune somehow held their own and confounded sceptics by remaining in the top eight almost all season, only to falter towards the end and finish 11th in the standings.

“We were satisfied in the end,” Malatjie said. “We had 25 points after game number 20. We were good in the first round. The wheels came off a bit in the second round because we won only one game.”

The poor form in the second half of the season led to Sekhukhune making a coaching change, bringing in Owen da Gama to work with MacDonald Makhubedu, but that also backfired. “It was a mistake because clearly this co-coaching thing doesn’t work,” Malatjie said. “Hence we’ve now brought it Kaitano Tembo.”

Sacked by SuperSport United last season, Tembo has a lot to prove in the new season, but Sekhukhune’s management clearly believe he’s the right man for the job.

Adding pressure on the Zimbabwean coach will be the fact Sekhukhune have recruited no fewer than 15 players, including some of the most sought-after talent in this transfer window period, such as Victor Letsoalo and Tshegofatso Mabaso. They also brought in Daniel Cardoso, Linda Mntambo and Tashreeq Morris.

“Our main aim this season is to finish in the top eight – nothing else,” Malatjie stated.

Though Babina Noko’s headquarters remains in Joburg as they wanted to retain most of their squad members who were reluctant to relocate, they will be playing their home games at Peter Mokaba Stadium in Polokwane instead of Ellis Park this season.

“We had to go back home because it didn’t make sense for us to be Sekhukhune and play in Gauteng. More importantly, we are a community team under paramount chief Sekhukhune, so we should be closer to our community. In that way it will help us build a solid home base.”

Despite being one of the senior players and being given the responsibility of leading Kaizer Chiefs, goalkeeper Itumeleng Khune is not expecting to ...
Sport
2 weeks ago

Kaizer Chiefs coach Arthur Zwane has expressed their difficulties in finding a number nine striker they want despite widening the net into the ...
Sport
2 weeks ago

Little transfer activity for City, with Manyama being assessed

With Cape Town City notably quiet in the transfer window, coach Eric Tinkler says he is pleased with the squad though they will be competing on all ...
Sport
2 weeks ago

The arrival of Bafana Bafana skipper Ronwen Williams to add to an already star-studded goalkeeping department at Mamelodi Sundowns has left many ...
Sport
2 weeks ago
Next Article