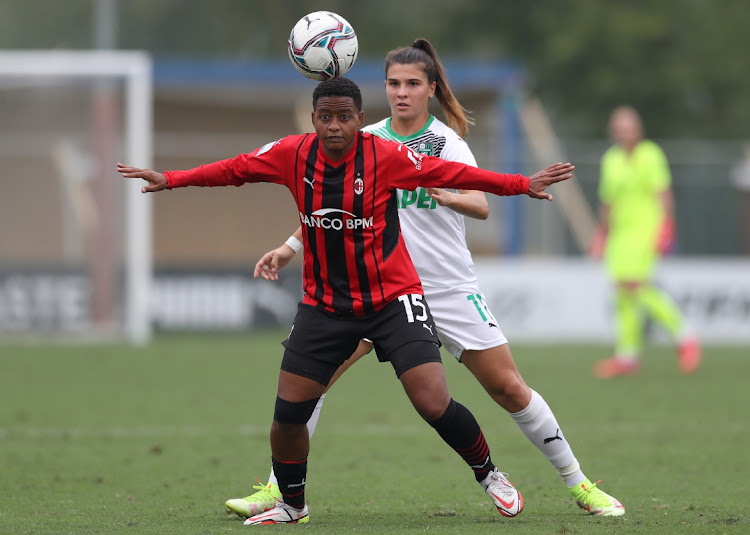 Jane Refiloe in the colours of AC Milan during her days in the Italian league before the start of Wafcon.
Image: Jonathan Moscrop

Having parted ways with Italian giants AC Milan before the start of the Africa Women's Cup of Nations (Wafcon) that Banyana Banyana won in Morocco last Saturday, skipper Refiloe Jane has underlined she is no rush to find a new club.

The 29-year-old Jane and Milan couldn't reach an agreement over a new deal, making the Banyana star a free agent. Jane, who was crucial in Banyana's Wafcon success, has emphasised she won't be impulsive in deciding her future. The Kliptown-born, Soweto, star wants to celebrate Banyana's glory to the fullest before plotting her next move as far as club football is concerned.

"At the moment, I am not stressing about my club career. My focus was on Wafcon and from now until maybe the next two weeks I will celebrate. I want to celebrate to the fullest and I don't want to rush things. I will consider a lot of things before deciding my future,'' Jane told Sowetan.

Jane is linked with Milan's rivals Fiorentina. The Banyana midfielder linked up with the Rossoneri in June 2019 from Australian side Canberra United. She made over 50 appearances in Italy, netting four goals in the process, where she mostly operated as a deep-lying midfielder.

Initially at Wafcon, Jane was deployed in more offensive roles until she started to play as a deep-lying midfielder from the quarterfinals until the final.

"Fifi", as Jane is affectionately known, has opened about her position transition in Morocco.

"The coach [Desiree Ellis] always asks me where I would like to play and I always tell her that defensive midfield is my comfortable position even though I can play in almost all the positions. They've given me that responsibility to be the stabiliser in front of the defence. I'd say it's a role that I am used to because in Italy I played there in a number of games,'' Jane stated.

"Women don't get the same pay as men but Banyana Banyana deserve everything, including the bonuses. They must get more money to make a living. I ...
Sport
3 weeks ago