Dad admits he knew nothing about the beautiful game 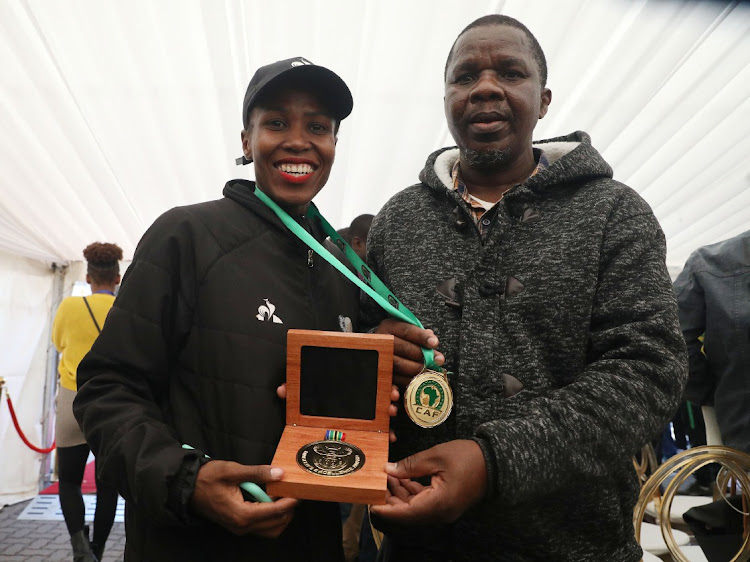 Nomvula Kgoale’s father Elifas was converted into a football fanatic following his daughter’s exploits at the Women's Africa Women’s Cup of Nations (Wafcon) with Banyana Banyana.

Nomvula’s dad admitted that he knew nothing about the beautiful game until his daughter started playing.

And he was beaming with pride as she landed alongside her triumphant Banyana teammates as champions of Africa after beating Morocco 2-1 in the final on Saturday to clinch their first Awcon title.

“When she started football at a young age, I was happy although I knew nothing about football, to tell you the truth,” Elifas told the media at OR Tambo International Airport yesterday.

“But now I started recognising football because of my daughter. I’m very proud of her. Now I will encourage her to get offers from overseas, as long as she is doing that for good.

“I’m very much proud of my daughter. She made it. She made miracles. To Banyana Banyana and Desiree Ellis, I want to thank everybody who contributed to this success.”

Nomvula, who was one of the unsung heroes in the tournament, could not control her excitement, and said she would sit down with her parents and ask if she can get them something special, thanks to the handsome bonuses that come with being African champs.

“My father is a retired principal. He was very smart in school. He is the guy who bought me soccer boots and every time I asked him about soccer boots he would say, ‘now you are starting with your soccer again’,” Nomvula said.

“Now I’m going to sit down with my parents and ask them what they want. But I’m very happy that this money is not going to waste. I worked hard every day to make my parents proud.”

Nomvula added that unity had been one of their keys to success in the tournament as they were up against all odds in the final against Morocco.

“Immediately when we entered the stadium, the crowd was booing us and everything was against us. But we were united as a team and we had one mission and one goal to achieve, and that was to bring the trophy to SA.”

WATCH | Banyana and Bafana to be paid the same in future, says Danny Jordaan

Women’s Africa Cup of Nations champions Banyana Banyana touched down at OR Tambo International Airport to a heroes’ welcome on Tuesday morning.
Sport
1 week ago

Banyana Banyana star Linda Motlhalo believes if it wasn’t for the strong mentality and unity in the squad, it would have been impossible for SA to ...
Sport
1 week ago
Next Article