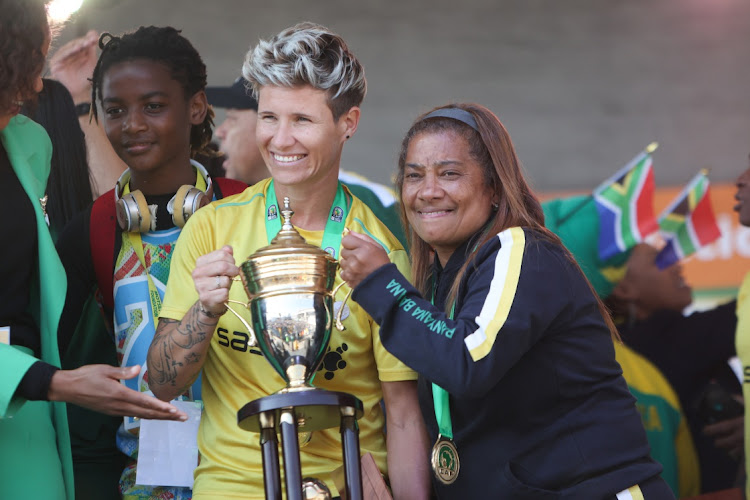 On Tuesday, the women's national team arrived to a packed OR Tambo International Airport as fans showed their love for Banyana Banyana.

In the crowd was Williams, who said the Wafcon victory brought back memories of the 1996 Afcon final for Bafana Bafana against Tunisia.

Banyana’s players were rewarded a cheque for R5.8m on top of the R9.2m already promised to them by the SA Football Association (Safa), making the total amount given to the players about R15m.

Williams said Banyana Banyana's arrival back in SA should have been made a public holiday, given this was their first time going all the way in the Wafcon.

“As a footballer player, you've got to have that hunger and sometimes when you make a lot of money that hunger disappears, and that's what we are seeing with Bafana Bafana.

“Women don't get the same pay as men but Banyana Banyana deserve everything, including the bonuses. They must get more money to make a living. I think that's important,” said Williams.

He said women’s football in the country was growing and corporate companies should sponsor them more.

“Give those ladies their flowers. They didn’t get tired. Salute Desiree and the queens,” she said.

“Corporates also have to come through with something for Banyana Banyana. BMW, Mercedes, Audi, where are the car sponsorships? Pick n Pay, Woolies? Momentum? First for Woman? Discovery? Magazines? Here are your cover stars so we send them to the World Cup full,” said Mdoda.

Here is a snapshot of what many had to say:

Huge respect for our incredible sponsor that has backed @Banyana_Banyana for over a decade 🇿🇦🙌 When womens football was kept in the shadows all those years, it was @SasolSA that uplifted & believed in providing the perfect platform for us. Massive thanks 💙#LiveTheImpossible https://t.co/WXLb1tigBw

Banyana Banyana are getting that R10m. R400k for each player. Hope after this tournament women’s football start attracting sponsors. More efforts on marketing. Forcing PSL teams so have women’s team will be a good start. They’ll be behind a brand meaning they’ll attract support

Corporates, please sponsor #BanyanaBanyana and give players endorsement deals. It’s simply the most beneficial to your brand.

Thank you @SasolSA for believing in & sponsoring @Banyana_Banyana! I hope other corporates will come to the fore & sponsor our champions!

Not enough is being said about @SasolSA support for @Banyana_Banyana this morning.