'They were concentrating on Seoposenwe' 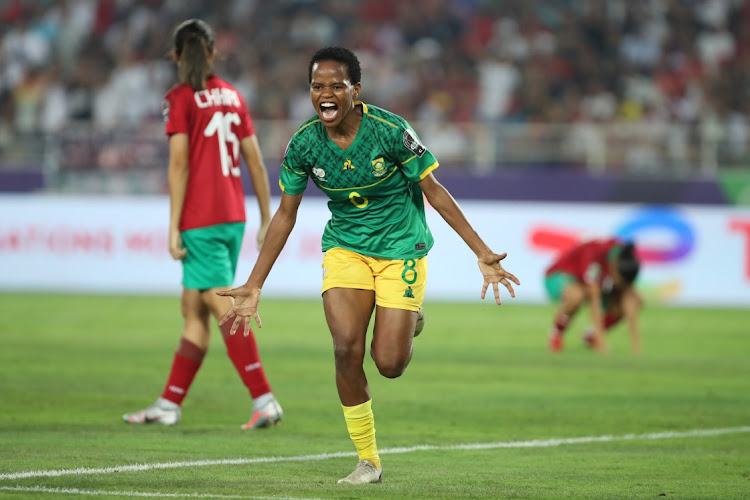 Banyana Banyana Africa Women's Cup of  Nations (Wafcon) final trump-card Hildah Magaia has narrated how she benefited from the fact that her strike partner Jermaine Seoposenwe was the centre of focus.

Born and bred in Dennilton, Limpopo, Magaia etched her name into SA football folklore when she netted a stellar second-half brace to help Banyana beat Morocco 2-1 in the Wafcon final at a packed Prince Moulay Abdellah Stadium in Rabat last Saturday.

The brace saw SA win their maiden Wafcon title, having previously lost all their last deciders. "The focus was on Jermaine and that gave me a big advantage because they didn't expect me to be the one to score.

"The defenders were all over Jermaine because she's a threat but I capitalised on that. However, Jermaine had a brilliant game, assisting me with the first goal. She was unstoppable in her own right,'' Magaia told Sowetan.

Magaia, a former TUT Ladies' skipper who now plies her trade with South Korean top-flight side Sejong Sportstoto, has since revealed the emotions got the better of her after scoring the second goal. The 27-year-old says she knew the goal would clinch the title for SA.

"When I scored that second goal I was so happy... the emotions overwhelmed me. I was sure that it was the goal that's going to win us the cup and it eventually did. A lot was going through my mind at that moment but besides the emotions, I realised that I must thank God for the gift of life,'' Magaia reflected.

Magaia still harbours thoughts of returning to Europe though she implied she was so happy in South Korea. Magaia joined Sportstoto from Swedish second-tier side Morön BK in March. Magaia added she'll spend her R400,000 Wafcon bonus with her family and save a certain portion of it, without really detailing.

"I can't say the club I am playing for is my last club. I still have ambitions to return to Europe. If a good offer comes, I will accept it and go for another challenge. At this moment no team has contacted me and to be honest I just joined my team, so I am not really desperate to move.

"I will spend a certain amount of my bonus with my family, obviously ... and save the remainder for rainy days,'' Magaia said.

Banyana Banyana captain Refiloe Jane says the team hopes winning the 2022 Women’s Africa Cup of Nations can speed the process of equal pay for the ...
Sport
2 weeks ago

Tried and tested Banyana Banyana defender Janine van Wyk has advised her teammate to invest their R400,000 bonuses they’ll get for clinching the ...
Sport
2 weeks ago

While the likes of goalkeeper Andile Dlamini, skipper Refiloe Jane and striker Jermaine Seoposenwe have deservedly hit the headlines for fine ...
Sport
2 weeks ago

Former South African Football Association (Safa) presidential hopeful Ria Ledwaba has called for more sponsors and teams to be formed in order to ...
News
2 weeks ago
Next Article