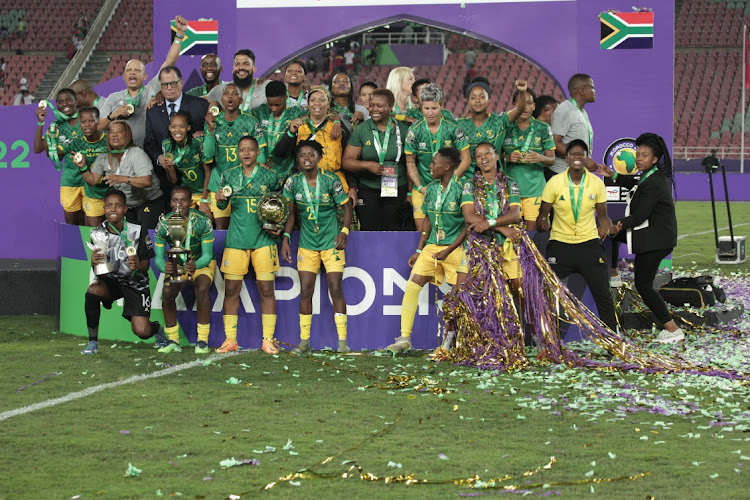 Banyana Banyana coach Desiree Ellis and skipper Refiloe Jane are of the view that their Africa Women's Cup of Nations (Wafcon) triumph should be enough to sway SA corporate world to invest in women's football.

After losing their five previous Wafcon finals, Banyana finally broke their jinx when they beat hosts Morocco 2-1 to lift the R8.4m trophy at a fully-packed Prince Moulay Abdellah Stadium in Rabat over the weekend. Hildah Magaia was Banyana's heroine after netting a splendid second-half brace, while Rosella Ayane grabbed Morocco's consolation goal.

It is an open secret that big companies have not been keen to invest in women's football, with Sasol having been the sole Banyana backer for years. Ellis wants Banyana's success to open doors for the sponsorship of women's game in SA.

"We've always asked for more companies to come on board but now we have this [showing her Wafcon gold medal]. So now we've got a lot of people behind us. Now it's really time for women's football to be sponsored fully in SA,'' noted Ellis in her media conference after the match.

Jane also shared the same sentiments as Ellis, feeling this is the right moment for giant brands to join hands with Banyana to financially support them. "Fifi", as Jane is nicknamed, chalked their success to selflessness and camaraderie among other teams, saying this was the best Banyana group she had ever seen.

"I think now we've shown with results. We've been on the rise. After today [Saturday], I don't think there's any better moment for South African corporate world to come on board. This [their Wafcon success] should be the game-changer in SA women's football,'' Fifi told Sowetan after the game.

"We always fought for one another. This is the best Banyana group I have ever seen as someone who's been in the team for a long time. Not even once did we try to put individual accolades before the team. We never tried to take the shine away from one another. We were a team, more than anything,'' noted Fifi.

Former South African Football Association (Safa) presidential hopeful Ria Ledwaba has called for more sponsors and teams to be formed in order to ...
News
3 weeks ago

Advocates for transformation and gender equality have lashed out at the bonus pay structure for the senior national women’s soccer team Banyana ...
News
3 weeks ago

Hildah Magaia's brace propelled Banyana to a 2-1 win over the hosts Morocco at a packed-to-the-rafters Prince Moulay Abdellah Stadium in Rabat on ...
Sport
3 weeks ago

Hildah Magaia scored a brace in the space of eight minutes to earn Banyana Banyana a 2-1 win over hosts Morocco in the Women’s Africa Cup of Nations ...
Sport
3 weeks ago
Next Article