'We want to bring trophies back to Chiefs' 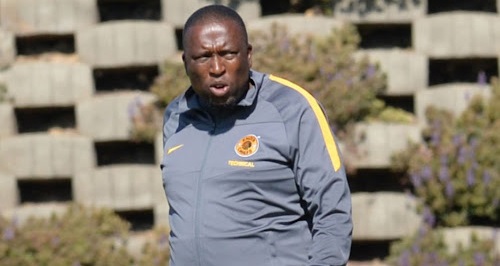 Kaizer Chiefs reserve head coach Vela Khumalo says he hopes the development side’s success in the Engen Challenge and DStv Diski Shield will filter to the first team in the upcoming season.

The youth side continued to bring the feel-good factor to the Naturena-based club this weekend after they secured their second Diski Shield title after they defeated Stellenbosch 2-0 at Mpumalanga Stadium, in Hammarsdale.

The win came courtesy of goals from Mfundo Vilakazi and Mduduzi Shabalala, sending more than 8,000 fans that were in attendance into a frenzy. They were also able to donate their R200,000 winning prize money to Naturena Primary School, bringing joy to the beneficiaries.

This was the second trophy the youth development team has won in as many weeks, while the senior team has been trophyless since 2015. However, with the changes from the management, coaching staff and new players coming in at the club, there's an air of optimism heading towards the new season at Amakhosi.

Khumalo hopes that the recent success of the Diski team will inspire the first team and create an incoming trophy spree.

"We have done this for every Khosination, maybe this is going to open the floodgates, we want to bring trophies back to Chiefs," said Khumalo. "We are saying let's do it right in the development and this must be contaminated to the first team.

"We won the Engen and now winning the Shield, winning has become second nature to us, it's all about winning. And for Kaizer Chiefs, we want to win all the time," he said.

Even though they're on a high at the moment, Khumalo has indicated that there's still room for improvement. "In football, you don't maintain, you always need to improve," he said.

"We didn't play fluently, we still need to be fluent in the entire 90 minutes. We played in patches, the boys were too cautious," Khumalo said.

Meanwhile, in the third place playoff game of the Diski Shield, Surprise Moriri's Mamelodi Sundowns beat Daine Klate's Chippa United 4-2 on penalties after they played to a 2-2 draw after 90 minutes.

Deon Hotto insists he was not shaken by the criticism levelled at him when Orlando Pirates lost the CAF Confederation Cup final to RS Berkane in May.
Sport
3 weeks ago

Newly appointed Royal AM coach Dan Malesela has admitted that there is bound to be a clash of thoughts between him and Khabo Zondo at some point but ...
Sport
3 weeks ago

Tried and tested Banyana Banyana defender Janine van Wyk has advised her teammate to invest their R400,000 bonuses they’ll get for clinching the ...
Sport
3 weeks ago

While the likes of goalkeeper Andile Dlamini, skipper Refiloe Jane and striker Jermaine Seoposenwe have deservedly hit the headlines for fine ...
Sport
3 weeks ago

Banyana Banyana coach Desiree Ellis and skipper Refiloe Jane are of the view that their Africa Women's Cup of Nations (Wafcon) triumph should be ...
Sport
3 weeks ago
Next Article