Co-coach not ruling out clash of ideas 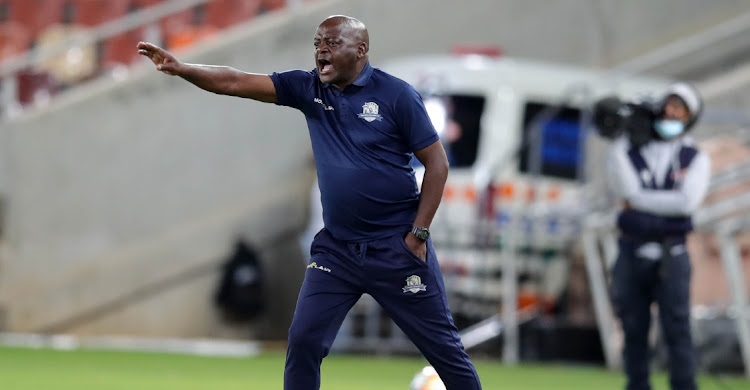 Newly appointed Royal AM coach Dan Malesela has admitted that there is bound to be a clash of thoughts between him and Khabo Zondo at some point but that they will find a way that will work well to benefit the club.

Malesela will be co-coach alongside Zondo and Abram Nteo in the Royal senior men’s team after his appointment on Friday.

Zondo, who has not coached in the DStv Premiership for 13 years, was appointed by the club at the beginning of July. His appointment came as a shock, and stories started doing the rounds that the move was not approved by club owner Shauwn “MaMkhize” Mkhize.

“There will always be clashes of thoughts from time to time, but we are people. We need to debate things maturely and purposefully. I can’t say I want to force something on the coaches; where there is no proper way neither of them will do that for sure. We just have to reason for the sake of the club because if we fail, we fail this club and everybody here,” said Malesela.

Malesela, 57, added that if they do things properly, the club will succeed in the upcoming new season.

“Because of his experience, I already see him as a technical director or adviser. I already see fresh and better ideas and continuity from what the team was doing, which was very good,” he said.

“So if we sit and do things properly, we will do well. Obviously, with the club being what it is, I saw that this is the opportunity to say there are better resources and facilities. So rather than do that and work with other coaches, I said it is possible.

“The only thing which is not possible is when you have not tried it and when you have tried it with honesty and the will to succeed, you will always find it right.”

Tried and tested Banyana Banyana defender Janine van Wyk has advised her teammate to invest their R400,000 bonuses they’ll get for clinching the ...
Sport
3 weeks ago

While the likes of goalkeeper Andile Dlamini, skipper Refiloe Jane and striker Jermaine Seoposenwe have deservedly hit the headlines for fine ...
Sport
3 weeks ago

Banyana Banyana coach Desiree Ellis and skipper Refiloe Jane are of the view that their Africa Women's Cup of Nations (Wafcon) triumph should be ...
Sport
3 weeks ago

Former South African Football Association (Safa) presidential hopeful Ria Ledwaba has called for more sponsors and teams to be formed in order to ...
News
3 weeks ago

Advocates for transformation and gender equality have lashed out at the bonus pay structure for the senior national women’s soccer team Banyana ...
News
3 weeks ago
Next Article