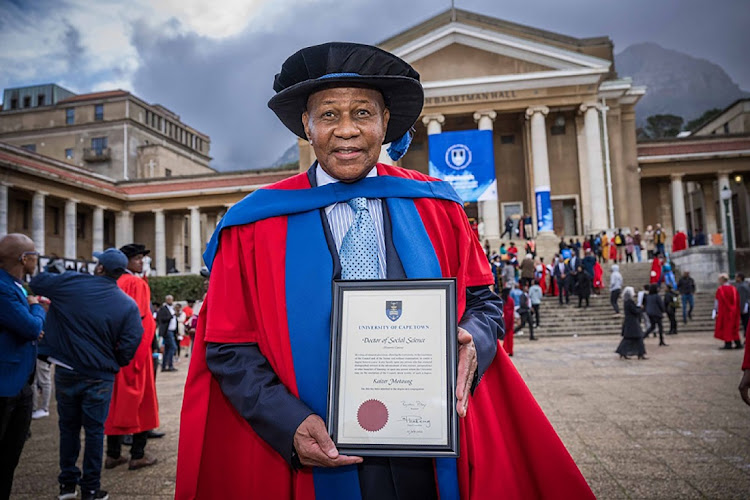 Kaizer Motaung has received an honorary doctorate from the University of Cape Town.
Image: Kaizer Chiefs/Instagram

Kaizer Chiefs boss Kaizer Motaung said his honorary doctorate from the University of Cape Town took him by surprise.

The degree of doctor of social science was awarded to him on Friday in honour of his contribution to football.

“Never in my wildest dreams did I think of something like this. But life being what it is, when I look back and reflect on where I come from, I realise that maybe it’s because it’s a calling that came upon me to take this route,” Motaung said.

“But it taught me lessons in terms of life, that it is a journey and, like any other journey, it has its ups and downs and its own experiences. So it’s just proving one thing that life can be challenging but also very fruitful, depending on the determination that one puts in whatever they are doing in their life.”

Motaung, 77, is grateful to the university and explained why he declined earlier invites from other institutions.

“Well, I think one has to look and think about it and see whether one deserves it. And also, whether the timing was correct for me to be able to accept some of those suggested honours. But obviously, there comes a time when you have to make decisions.

“So I nearly delayed my acceptance or my willingness to go ahead with other institutions and, of course, when this one came, I also had to reflect because I was in a dilemma because the other institutions that came before would want to question why I did not consider theirs.

“But as I said, there comes a time in life where you have to make decisions and tough ones sometimes. But having gone through this one and having studied and checked research, I find out that this is an institution that fully deserves consideration.

He said he considered the history of UCT and was happy to be part of it.

“I don’t think I will have any regrets.”

He has been part of the PSL executive committee for decades working alongside the league’s chairman, Irvin Khoza.

“It is an unselfish contribution that we were faced with and I can only thank a lot of people, men, and women, who were part of this journey.”

Kaizer Chiefs founder Kaizer Motaung senior has had an honorary doctorate conferred on him by the University of Cape Town (UCT) during a graduation ...
Sport
2 weeks ago

Kaizer Chiefs owner Dr Kaizer Motaung said “never in his wildest dreams” growing up in Soweto and in his formative years as a footballer could he ...
Sport
2 weeks ago
Next Article