'It is going to be a new challenge but I'm happy' 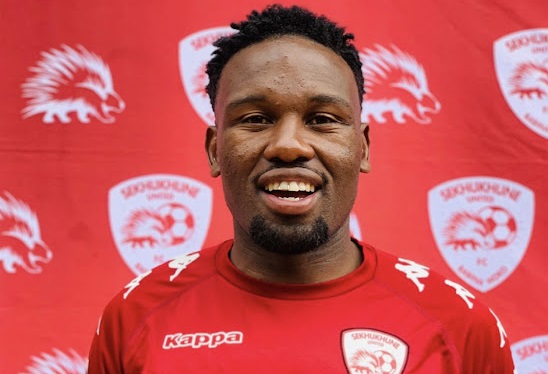 New Sekhukhune United striker Victor Letsoalo predicts a challenging season for him with the club as he wants to try and translate the performance he had with Royal AM last campaign.

Letsoalo had an outstanding season with Royal where he scored 15 goals and helped the club qualify for the CAF Confederation Cup.

As he looks to show the same performance at Sekhukhune, the 29-year-old feels it will be challenging because of the new environment but has vowed to work hard and help the team.

“It is going to be a challenge for me at a new club and a new environment with all the players that I’m going to play with,” Letsoalo explained to the club media department yesterday.

“I’m just looking forward to doing my best and playing well and fighting with the guys because it’s all about unity.

“We are going to work together and try to score goals and win a game. That's all that matters.”

Letsoalo, who was also linked with a move to Soweto giants, Kaizer Chiefs and Orlando Pirates, insists he is happy to have joined Babina Noko as he will be playing in his home province, Limpopo, in the new season.

“It’s all about the mentality and the group of people that we are working with. It is a motivation to pick up from what we have done before. I’m looking forward to working with the guys and we will fight as players to win games.”

The club also unveiled Tashreeq Morris and Siphosakhe Ntiya-Ntiya as they continue to strengthen the team ahead of the new season.

Meanwhile, Ntiya-Ntiya said he will try not to disappoint the club after the faith they have put in him.

“I would like to thank the club for opportunity that I was given and I will work hard to put the team in a better position this season,” he said.

Kaizer Chiefs have loaned out two players Lebohang Lesako (23) and midfielder Darren Matsheke (23) to Swallows FC for the upcoming 2022-2023 campaign.
Sport
4 weeks ago

Women’s Africa Cup of Nations finalists Banyana Banyana will be bitterly disappointed not to have a player among the three finalists for Player of ...
Sport
4 weeks ago
Next Article