Matlou aims to win Awcon before hanging up her boots 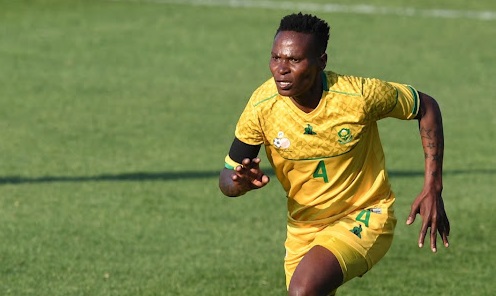 Noko Matlou is hoping to bow out on a high by taking gold at the Awcon in Morocco.
Image: Lefty Shivambu/Gallo Images

The ongoing Women's Cup of Nations (Awcon) in Morocco could be the last major tournament for Banyana Banyana stalwart Noko Matlou.

It is for that reason the 36-year-old veteran defender who began her career as a striker wants to go all out for gold and leave a legacy of Awcon triumph before hanging up her boots. SA has not won the continental championship for women despite reaching the final match five times before.

"It is every player's dream to leave a mark before retiring. I also want to be that player who'll be remembered when I am no longer playing football. To be remembered, you have to win trophies... that's a kind of a legacy I want to leave, so it's important to me to go all out to try and win this tournament,'' Matlou said.

Nigeria are firm favourite to defend their title but there's a feeling among others that Banyana can upset the Super Falcons. Tonight's clash between these powerhouses of African women's football has been dubbed as a "final before the final" for many reasons.

One such reason is that this fixture is a repeat of the last edition's decider where Nigeria beat SA on penalties in Ghana in 2018. That Banyana managed to beat Nigeria 4-2 in the Aisha Buhari Cup final in September last year has raised hopes that the Desiree Ellis-coached side can oust the Super Falcons from the throne of being the queens of the African women's football.

Matlou, the first SA player to win the African Women's Footballer of the Year back in 2008, admits beating Nigeria in the Aisha Buhari Cup has made them believe they can do it again in Morocco.

"Having beaten Nigeria last year in the Buhari Cup gives us confidence that we can beat them again. However, it’s not going to be easy because they will want to revenge for that loss. Still, we're ready for anything,'' noted Matlou, who recently signed a one-year contract extension with her Spanish top division side Eibar.

On her new Eibar deal, Matlou said: "I’m so happy to extend my contract again it shows that they still believe in me and my hard work."

Banyana ‘ready to go’ against Nigeria as they eye Wafcon trophy

Banyana Banyana’s arrival in Morocco has gone smoothly and confidence is high they can reach a second Women's Africa Cup of Nations final in ...
Sport
1 month ago

Former Banyana Banyana coach Vera Pauw has revealed she was raped by a prominent Dutch football official during her playing days.
Sport
1 month ago