Banyana ‘ready to go’ against Nigeria as they eye Wafcon trophy 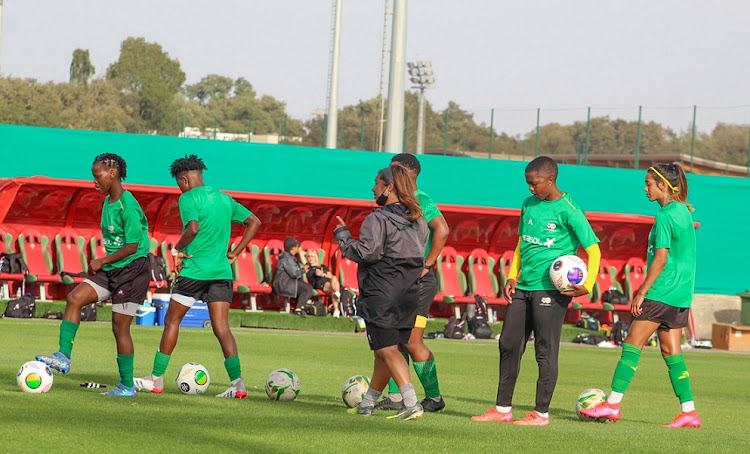 Banyana Banyana are taken through their paces by coach Desiree Ellis in Rabat, Morocco, ahead of their opening game against Nigeria in the Africa Women Cup of Nations.
Image: SA Football Association/Twitter

Banyana Banyana’s arrival in Morocco has gone smoothly and confidence is high they can reach a second Women's Africa Cup of Nations (Wafcon) final in succession, and then try to finally also go one better, the team says.

Five-time bridesmaids Banyana open the 2022 tournament in Morocco against 11-time brides Nigeria at Rabat’s Stade Prince Moulay Al Hassan on Monday night (7pm SA time). They will hope to still be in the tournament when the final is played in just under three weeks’ time, on July 23.

The South Africans arrived in Morocco a touch short on preparation. They played two friendly games ahead of the continental showpiece — a 3-0 loss to Zambia in February and a 5-1 drubbing by Netherlands in April.

They also played the final round of qualifiers, where they weren’t that impressive, against Algeria in February. But their training sessions in Rabat have proceeded without a hitch.

The Moroccan capital has been a cool for summer 24°C the past few days, and is scheduled to stay that way to Monday, so Banyana will experience for ideally mild evening temperatures in their game against Nigeria. The city is supposed to warm up to 32°C by next weekend.

How it started (rehearsal) 🆚 the final product below ⬇️

For Banyana, the markedly warmer conditions from SA’s freezing winter have made for a pleasant welcome to Morocco.

“I think we’re all pretty excited just to have some warmth — back home it’s so cold,” goalkeeper Kaylin Swart said.

“It’s nice to be out in the sun and we’ve all acclimatised pretty well to the weather.

“We’re all pretty positive leading up to the opening game. We’re in good spirits and I think the coaches have done a good job with us.

“And we just hope for a positive result [against Nigeria] and then just move forward. And then hopefully we can get to our end goal, which is the final and actually win it. Everyone’s ready to go.”

In three five-time runners-up Banayana’s Wafcon finals, including the previous edition in Ghana in 2018, Nigeria have stood in the way of the South Africans and an elusive first gold medal.

What actually happens behind the scenes before we finally get a professional team photo! 😅

A defeat in their opening litmus test against the Super Falcons on Monday will not be greeted as a disaster by Banyana as they face tournament rookies Burundi (Thursday) and Botswana (Sunday) in their next two games.

SA coach Desiree Ellis, though, has warned against complacency against the supposed minnows.

“This is the 14th edition of the tournament and we are also making our 13th appearance, and this speaks volumes about Banyana,” Ellis said.

“In 2018 we finished second and our aim remains doing the best we possibly can to improve on that result.

“Banyana have played neighbours Botswana numerous times so we are well aware of their capabilities — our loss to them in the 2020 Olympic qualifiers where we failed to score over two legs and lost on a penalty shoot-out is well documented.

“We also know the quality of Burundi who clinched second place in the 2022 Cecafa Senior Women’s Championship earlier this month in Njeru, Uganda.

“Our group looks easy on paper but football is not played on paper, which simply means we have to work hard to achieve our goal.”

Hosts Morocco opened the tournament with a 1-0 win against Burkina Faso on Saturday night.