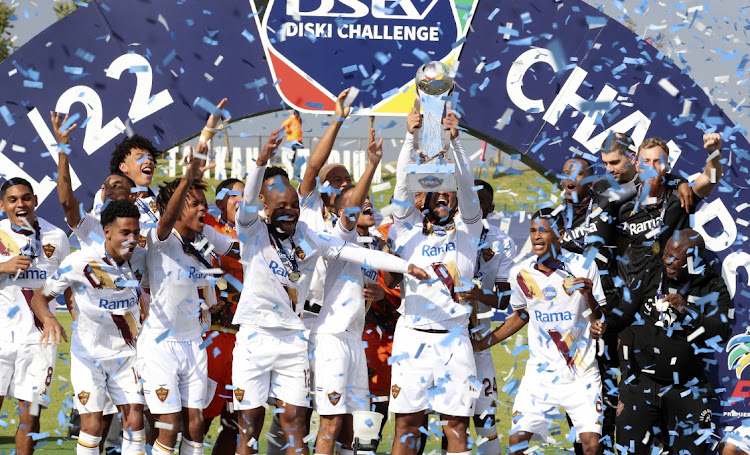 In what was a title race that went down to the last day, the young Stellies beat Thabo September's SuperSport United to this season's title. A 2-1 win over TS Galaxy cemented Stellenbosch's position at the top, to close off a remarkable season where they chased down Orlando Pirates and eventually amassed  64 points.

Having lost the title by a mere two points, SuperSport players were gutted, but the young prospects from Pretoria ended the season with a record of 10 successive victories after they defeated Royal AM 2-0.

Vellios, who is the only coach in SA to win the Varsity Cup and DDC titles, reflected on what this win means for the development of the club's academic programme.

"It's a tremendous achievement for our club, having started this journey three years ago when we joined the PSL," said Vellios.

"Having players come through from our structures and others to build such a strong team over three seasons and to see them capping it off with a gold medal is very special. It's a special group of players, I'm thankful they could get it over the line.

"It puts the club out there as a destination for talented footballers to come and progress their careers. We have a head coach in Steve Barker who believes in youth, giving them opportunities, he's never scared to throw in a young player," he said.

The next step for the young Stellies coach is the rebuilding phase, the three-year cycle of the team has come to an end, some of the players have graduated to the first team, and others will go to seek opportunities elsewhere.

Having led Richards Bay to promotion to the DStv Premiership, head coach Pitso Dladla is waiting on owner Jomo Biyela's call to confirm if he'll lead ...
Sport
3 months ago

In the wake of reaching the CAF Confederation Cup final, Orlando Pirates coach Mandla Ncikazi has chosen to ignore the Buccaneers' rather ...
Sport
3 months ago

Orlando Pirates defender Paseka Mako has opened up about his horrific injury when he collided with goalkeeper Richard Ofori during their DStv ...
Sport
3 months ago
Next Article