Coach says team prepared well and played to win it 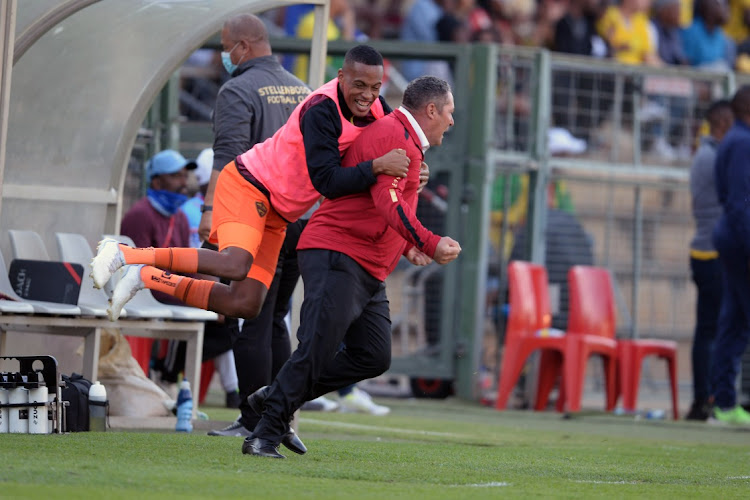 Stellenbosch mentor Steve Barker is convinced they’d have thumped Mamelodi Sundowns even if they hadn’t already clinched the league title.

Stellenbosch outwitted Sundowns 3-0 in the penultimate round of league fixtures at Tuks Stadium over the weekend. It was Sundowns’ first league loss since they were beaten by Kaizer Chiefs in April last year.

Ashley Du Preez netted a brace and Jayden Adams was also on the score sheet.

“For the whole club, it’s a special day today to have achieved what we’ve done with the youngsters ... to come here in the backyard of Sundowns and beat them 3-0. We played a role in Sundowns not looking like Sundowns today. We didn’t allow them to be the Sundowns they can be but also they’d won the league already,” noted Barker.

“We probably had more to play for than them but they’re a club that’s built on success and winning is in their DNA. I don’t think they came out not wanting to win the game. I feel we played the situation really well. I wouldn’t say we caught them on a bad day, I’d say we were just good.”

The Stellies trainer revealed how they masterminded the tactics that ended up handing them the famous win in Tshwane. “When you play Sundowns, I think it starts with defending well. We had to do that. They’re a team that if you give them too much time on the ball they can get comfortable,” said Barker.

“They don’t like a team that’s in their face and are aggressive in their defence. We knew they’d leave a high line just the way they have possession so deep in our half and we used Ashly in behind because we knew his pace would cause problems, which it did with the two goals. Obviously our third goal was a bit of class from our youngster Adams.”

Stellies are now guaranteed to finish in the top-eight, a feat they’d never achieved since they were promoted in the 2018/19 term. Barker’s men face provincial rivals Cape Town City on the final day of the DStv Premiership campaign on Saturday.

TS Galaxy coach Sead Ramovic has yet again bemoaned his side’s bluntness upfront as they can still be relegated.
Sport
1 month ago

As Kaizer Chiefs look to rebuild their squad for next season, interim head coach Arthur Zwane says there’s not much quality in the market, hinting ...
Sport
1 month ago

The two goals Orlando Pirates scored in the first leg of the CAF Confederation Cup semifinals against Al Ahli Tripoli away last Sunday proved ...
Sport
1 month ago
Next Article