Da Gama urges Sekhukhune to hold on to their stars

Teams could be knocking on door for club's top players 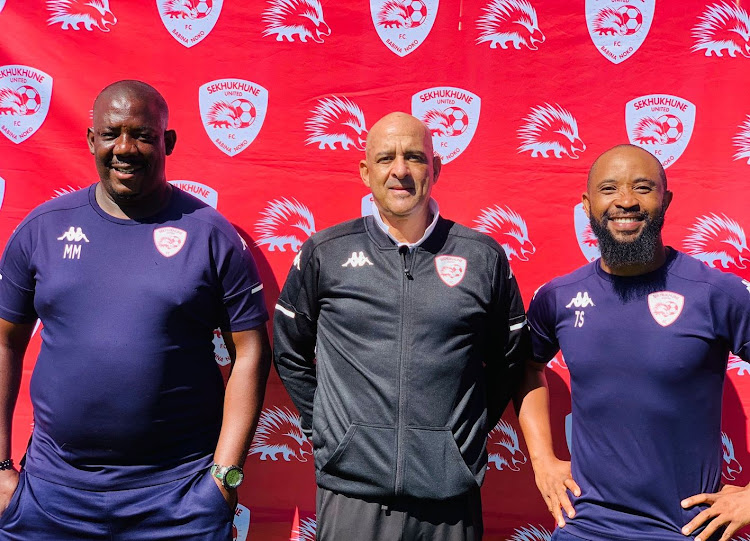 After retaining their DStv Premiership status in their debut season, Sekhukhune co-head coach Owen da Gama has advised the club to hold on to their best players in the transfer window if they want to remain competitive.

Babina Noko continue to be on an upward trajectory in SA football, establishing themselves on and off the field. The Johannesburg-based side had a fast-paced start in the Premiership, under the guidance of co-head coach MacDonald Makhubedu, and were able to catch teams off guard and collect valuable points.

By the time they had run out of gas they had done enough to secure their place for next season.

Looking to the off-season, there may be teams knocking on the door of Sekhukhune chair Simon Malatji looking to buy some of his players.

“The first thing I said to our chairman is if we want to compete in this league we cannot sell our players locally,” said Da Gama.

“If you want to compete in this league you have to hold on to your best players and if opportunities come, then they should be international opportunities. Otherwise you'll just have to start from the beginning.

“You build a player and you sell them, it's back to square one again. My advice, and it's the chairman's prerogative, is hold on to your players for the next two to three years, build a team around them and get quality players.”

The players that are likely to attract big clubs include Bafana Bafana's Yusuf Maart, goalkeeper Toaster Nsabata and Vusumzi Mncube. Da Gama was full of praise for the trio, insisting he can take them to another level.

“For me, Toaster Nsabata is the best goalkeeper in this country and Yusuf is one of the best midfielders in the country. There are a few other players as well.

“Mncube, for me, with some coaching and hard work and getting some fitness into him, we'd have a fantastic player. It's all about those small things. We are trying to get the boys to where they can perform for 90 minutes,” said Da Gama.

With one round of matches left in the Premiership, Sekhukhune, who are in 11th place with 32 points, face Marumo Gallants at the Peter Mokaba Stadium on Saturday.

Shalulile, Tinkler named the best of PSL for April

Mamelodi Sundowns talisman Peter Shalulile has been left overwhelmed by winning DStv Premiership Player of the Month for April, dedicating the gong ...
Sport
2 months ago

The Premier Soccer League has rescheduled Orlando Pirates' fixtures after their qualification for the CAF Confederation Cup final.
Sport
2 months ago

Stellenbosch reserves head coach Evangelos Vellios believes winning the DStv Diski Challenge puts them on track to become the premium academy in the ...
Sport
2 months ago

Mamelodi Sundowns defender Divine Lunga has made it clear he wants to fight for his place as a left-back rather than a centre-back at the Brazilians, ...
Sport
2 months ago
Next Article