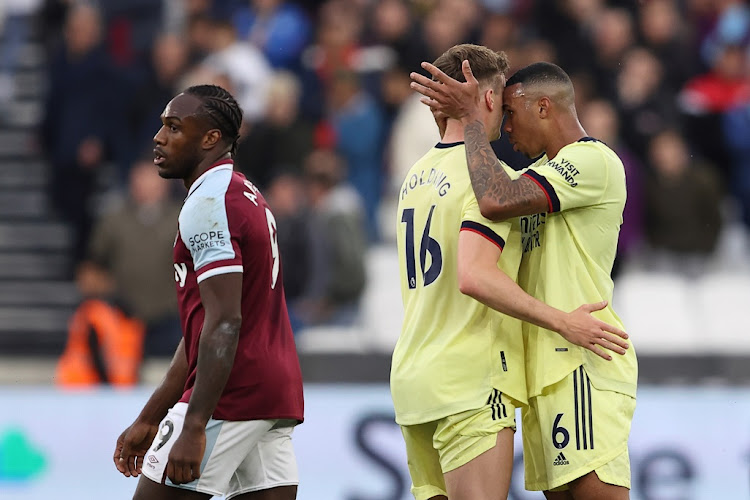 Arsenal regained fourth spot in the Premier League with a 2-1 victory away at West Ham United thanks to a second-half header by Brazilian defender Gabriel at the London Stadium on Sunday.

The Gunners had been knocked out of the last Champions League qualification spot by north London rivals Tottenham Hotspur earlier on Sunday after they beat Leicester City. But Arsenal responded to the pressure with a third consecutive victory to give them the edge in what has become a two-horse race for fourth place.

After a cagey opening to the contest in which Arsenal enjoyed most of the possession, Rob Holding gave the visitors the lead with a glancing header from a 38th-minute corner. West Ham levelled on the stroke of halftime, however, with Jarrod Bowen's shot taking a deflection to beat Aaron Ramsdale who moments earlier had saved well from Declan Rice.

Gabriel ensured Arsenal remained in the driving seat for a long-awaited return to the Champions League though, with a north London derby still to come, the race is far from over. Arsenal have 63 points from 34 games with Tottenham on 61 points, also with four games left to play.\

Seventh-placed West Ham are now out of the running for fourth place with 52 points and only three games left and their focus will turn to next week's second leg of their Europa League semifinal against Eintracht Frankfurt.

Arsenal's Granit Xhaka fully deserved the warm applause from the fans after scoring in Saturday's 3-1 Premier League win over Manchester United, ...
Sport
2 months ago
Next Article