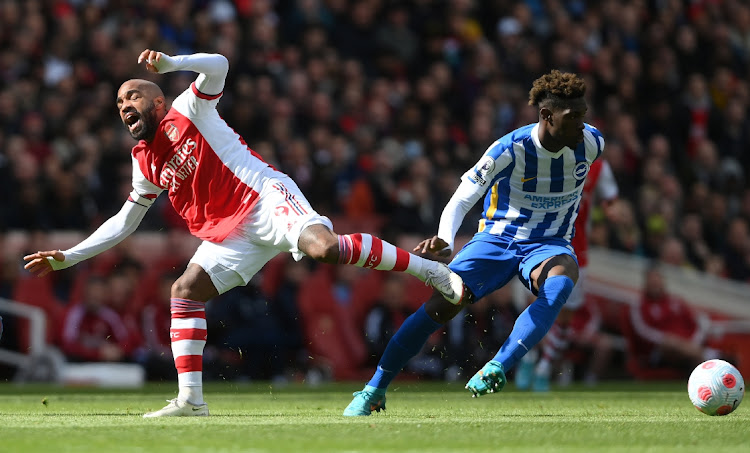 Alexandre Lacazette of Arsenal is challenged by Yves Bissouma of Brighton & Hove Albion during the Premier League match between Arsenal and Brighton.
Image: Mike Hewitt

London - Arsenal manager Mikel Arteta has urged Alexandre Lacazette to remain focused on the club after the French forward said he was in talks with a number of teams ahead of a move away from the Emirates Stadium in June.

The 30-year-old, whose contract expires at the end of the season, hinted at a return to former club Lyon in an interview and said he missed playing in the Champions League.

Arteta, speaking ahead of today's trip to Chelsea, told reporters that he wasn't entirely surprised by Lacazette's comments but asked the striker to remain committed to Arsenal.

"He doesn't need to tell me what he does. His contract situation allows him to make a decision about his future," said Arteta.

"We have expressed our intention is to speak in the summer. For the rest, I just want him fully focused on his duty which is to defend Arsenal in the best possible way."

Lacazette, who signed for the London side in 2017, has scored six times in 31 games across all competitions this season.

Forward Eddie Nketiah also appears to be on his way out after the youngster said he had delayed signing a new deal due to a lack of minutes under Arteta, with the manager saying that the player had a right to feel aggrieved.

"He is right to be upset. This is what we want from the players that haven't had the minutes... with Eddie I said many times as well how much I rate him. That the fact that we have big plans for him at this club."

Arsenal, who have lost their last three league games to slip to sixth, will be hoping for a big result against Chelsea to revive their hopes of qualifying for the Champions League. They are three points off fourth-placed Tottenham Hotspur but have a game in hand.

"We have to be at our best against the best team in Europe that showed last year what they can do with everything that they have and with the ability that we have as well. We're going to go there as always to win the match," said Arteta.

Manchester United forward Cristiano Ronaldo will not play against Liverpool in the Premier League later on Tuesday following the death of his newborn ...
Sport
4 months ago

Barcelona's faint hopes of catching LaLiga leaders Real Madrid suffered a huge blow as they slipped to a shock 1-0 home defeat by ...
Sport
4 months ago

Jurgen Klopp believes he witnessed one of Liverpool’s best first-half performances in his time as Reds manager during their FA Cup semifinal victory ...
Sport
4 months ago

It’s time for Chelsea to win a final at Wembley, says Mason Mount

Chelsea midfielder Mason Mount has called on his teammates to break their losing streak in cup finals at Wembley Stadium and avenge their League Cup ...
Sport
4 months ago
Next Article