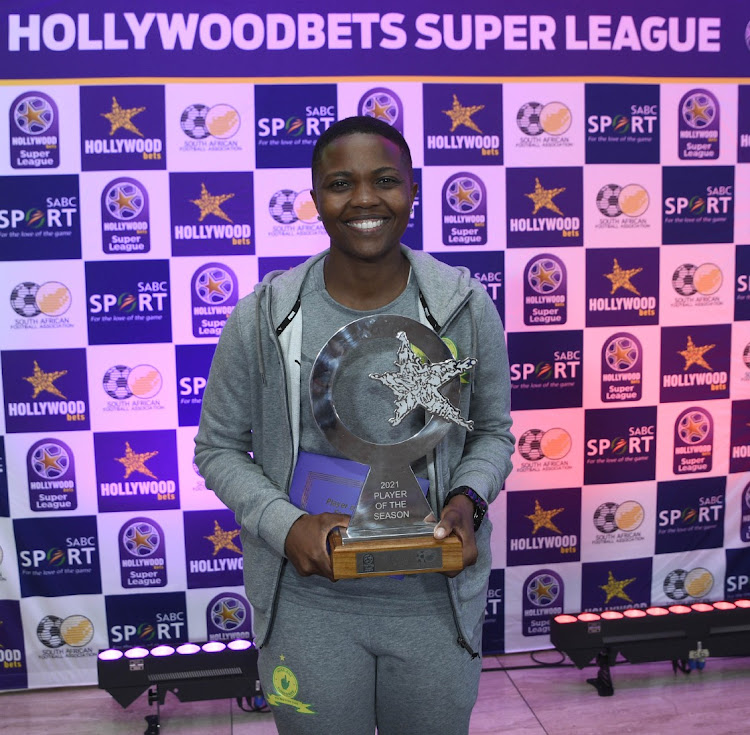 Newly crowned Hollywoodbets Super League Player of the Season Bambanani Mbane of Mamelodi Sundowns Ladies wants to win the Africa Women Cup of Nations (Awcon) and qualify for the Fifa World Cup knockout stages with Banyana Banyana before thinking about hanging up her boots.

Mbane, 31, scooped the Super League award at a glamorous awards ceremony at Sandton Convention Centre on Saturday. The gong was accompanied by a R50,000 cheque. Mbane, who joined the Chloorkop-based side from Belarusian outfit Minsk in April last year, was instrumental in Sundowns' Super League triumph where they finished the season unbeaten.

"I feel honoured to win this award, but this is not only for me because without my teammates I wouldn't have won it, so I dedicate it to all the ladies I play with. I have achieved a lot in the past few months but my aim is to win Awcon and play [in the] World Cup last 16 with Banyana before thinking about retiring," Mbane told Sowetan yesterday.

‘Juice’ also clinched the SA Football Journalists Association (Safja) Women’s Player of the Year gong in February, pocketing R15,000. The player from Sterkspruit, Eastern Cape, divulged how she will spend her recent winnings.

"I will renovate my home in Eastern Cape. My mom will get a share, so will my wife, who's always been there for me," said Mbane.

Thanks to Mbane's defensive prowess, Sundowns kept a whopping 21 clean sheets and conceded only 15 times from as many games across three competitions last season. Mbane was also selected in the Champions League team of the tournament. She was nominated with her Sundowns teammate Andisiwe Mgcoyi and Sibulele Holweni of University of Western Cape (UWC) in the Hollywoodbets Super League Player of the Season category.

Living with blindness has not stopped former Orlando Pirates defender Bernard “Shoes” Lushozi from following his dream to make a contribution in the ...
News
4 months ago

SA Football Association (SAFA) president Danny Jordaan has tightened his grip on power with the 30th Ordinary Congress in Sandton on Saturday ...
Sport
4 months ago
Next Article