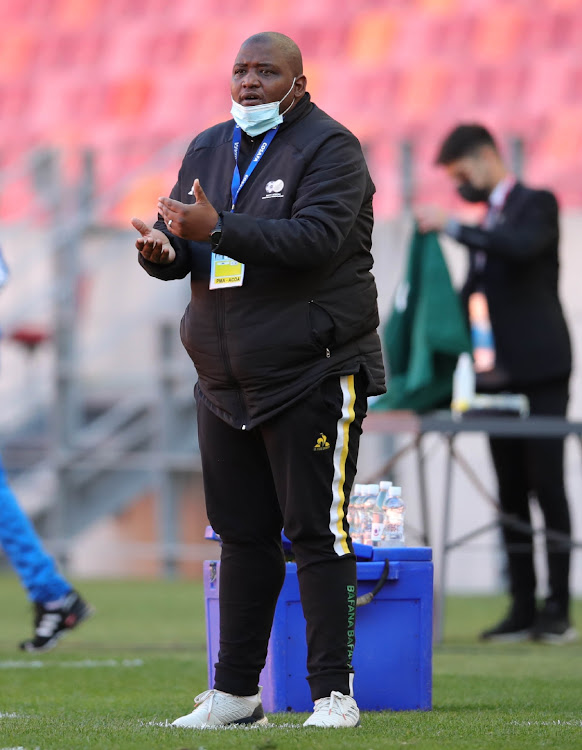 Morena Ramoreboli, who’s grabbed headlines across Africa after guiding less-fancied Jwaneng Galaxy of Botswana to the group stages of the CAF Champions League, has detailed how Pitso Mosimane lent him a helping hand to achieve this feat.

Born in a small Free State farming town of Rosendal, near the Lesotho border, 41 years ago, Ramoreboli inscribed his name in the Galaxy history books by becoming the first coach to take the club to the group phase of the Champions League, eliminating massive favourites Simba of Tanzania via a 3-3 aggregate score.

Simba had beaten Galaxy 2-0 in the first leg at home, but the Botswana side showed an unrivalled spirit to turn the tables in their away leg in Dar es Salaam, thumping the East Africans 3-1 to progress on away goal rule last Sunday.

Ramoreboli has chosen to be rather self-effacing, giving Mosimane a fair share of credit for helping him plot for Simba. Mosimane, who is attached to Egyptian giants Ah Ahly, is seen as the epitome of success on the continent, thanks to his three Champions League titles.

“I spoke to coach Pitso before the first leg against Simba. He helped me to profile them. After my chat with him, I knew what to expect from Simba. Coach Pitso is there for SA coaches,’’ Ramoreboli told Sowetan yesterday.

“One thing I like about him is that he doesn’t wait for you to call him, but he picks up his phone and calls you. He’s always been there for me, so I can say he played a role in us outshining Simba.’’

The tactician, who holds a CAF A licence, thrust into the spotlight when he masterminded then third tier side Maluti FET College’s 4-1 humiliation of giants Orlando Pirates in the Nedbank Cup back in 2013.

However, Ramoreboli’s career dwindled a bit until he re-surfaced to help Bafana win the Cosafa Cup as a caretaker coach in July this year, taking over from Helman Mkhalele, who missed the tournament after contracting Covid-19.

Beating Pirates, winning the Cosafa Cup and taking Galaxy to the Champions League group phase are understandably the highlights of Ramoreboli’s career so far. However, the Galaxy coach still finds it hard to pick the most important feat among the three.

“All the three achievements are important. It’s difficult to say which one I rate as the best. Each has its significance. Beating Pirates was an introduction. Winning the Cosafa was about reminding people who is Morena Ramoreboli,’’ stated the Galaxy coach.

“Doing well in Botswana, I am now knocking on the continental space to say ‘here’s this one coach who’s willing to learn’. So I am prepared to leave my mark on the continent.”

Banyana Banyana coach Desiree Ellis is not pleased with her side's performance despite the 6-0 victory over Mozambique at FNB Stadium yesterday.
Sport
6 months ago

Stellenbosch could go second on the log if they defeat strugglers Marumo Gallants in their DStv Premiership encounter at the Danie Craven Stadium ...
Sport
6 months ago

Talented Sekhukhune United shot-stopper Toaster Nsabata has disclosed his rather funny first name has never ceased to subject him to mockery. ...
Sport
6 months ago

With Bruce Bvuma currently not playing at Kaizer Chiefs, Oscarine Masuluke looks set for a spot in Bafana Bafana's squad for the upcoming 2022 Fifa ...
Sport
6 months ago
Next Article