SA crush Mozambique to cruise into next round of Awcon qualifiers 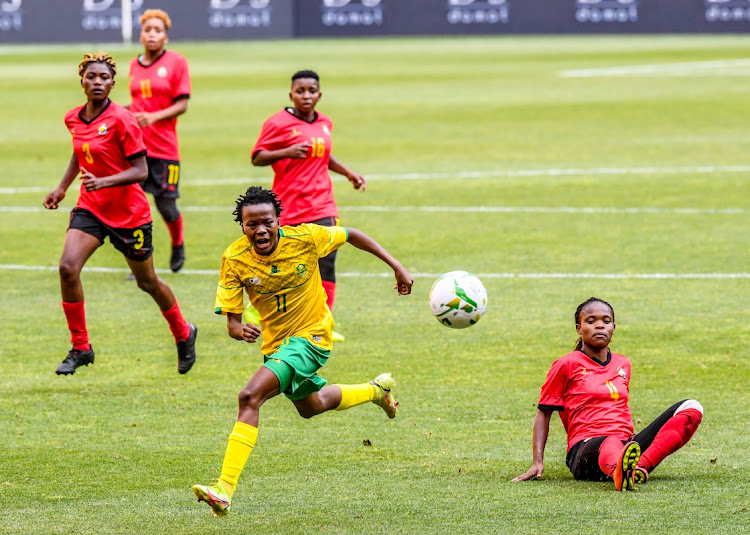 Thembi Kgatlana of South Africa with the ball during the 2022 Africa Women Cup of Nations, Qualifier match between South Africa and Mozambique at FNB Stadium on October 26, 2021 in Johannesburg.
Image: Sydney Seshibedi

Banyana Banyana coach Desiree Ellis is not pleased with her side's performance despite the 6-0 victory over Mozambique at FNB Stadium yesterday.

The two teams had met for the second leg of an Africa Women Cup of Nations (Awcon) qualifier. Banyana won 13-0 in aggregate after winning 7-0 in the first leg played in Maputo last week. The SA women's senior national team will now face Algeria in the next round of the qualifiers in February.

However, despite the bright-looking picture about Banyana Banyana progress, Ellis is unhappy that her team didn’t play the way the coaching staff had expected.

“Look, we were not happy with our rotation of the ball. It was really slow and we started playing the long balls,” Ellis said.

“Our movement was a bit slow up front. The goals that we scored came from our passing and our movement of the ball and we wanted more of that, but we couldn’t just get going.

“The second half, we couldn’t just get going but we won the game and we moved to the second round, but we have to keep improving.”

The 58-year-old might perhaps be a bit harsh as her charges were facing a virtually dead rubber after the 7-0 lead from Mozambique. However, even with the six goals yesterday, Ellis feels they should have scored more from the chances they created..

“I thought our positioning in the box was not great. When the player came running through [with] the ball, no-one was giving support from behind, so we tried to work on that in the second half and it looked a bit better.

“We also wanted the centre-backs to get involved in the game because they were sitting very deep, so we wanted them to start the play, then we created more opportunities in the second half.”

Banyana Banyana coach Desiree Ellis was thrilled with her side's performance after hammering Mozambique 7-0 in their Africa Women’s Cup of Nations ...
Sport
6 months ago

Ellis not taking Mozambique for granted

Banyana Banyana coach Desiree Ellis has stressed the significance of starting their journey to secure a spot in next year’s Africa Women’s Cup of ...
Sport
6 months ago

Even as she faced hurdles, pitfalls and potholes along the way as she pursued her dream of becoming a footballer, Kanalelo Taiwe didn’t for once ...
Sport
7 months ago

Banyana Banyana coach Desiree Ellis could not hide her disappointment after their lowly finish at the Cosafa Women’s Challenge in Gqeberha at the ...
Sport
7 months ago
Next Article