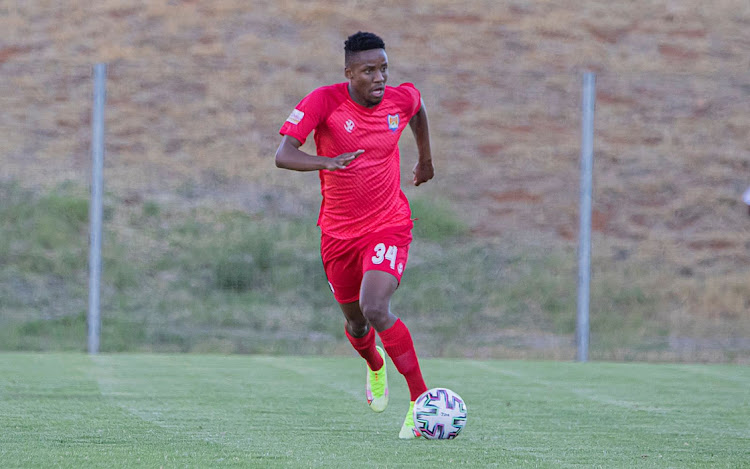 Highly-rated left-back Malebogo Modise is indebted to GladAfrica Championship side JDR Stars for taking him on loan, hoping to use the opportunity to grow so he’ll return to his parent club Mamelodi Sundown and stake his claim.

After spending last season on loan at Maritzburg United, where he featured 13 times across all competitions, Modise would have hoped to return to Downs and fight for his place this term. However, the arrival of experienced left-backs such as Divine Lunga and Sifiso Ngobeni seem to have forced the Brazilians to send him out on loan again, this time to Tshwane-based JDR.

“I am grateful for the opportunity JDR gave me…obviously I want to get more game time here, so I can go back to my parent club and get more caps there and be a regular," Modise told Sowetan yesterday.

“I’ve been settling well at JDR, I mean the guys welcomed me well ... so I never felt like I am new or anything like that. I know some of the players... that also made it easy for me to feel at home here at JDR.”

The Mafikeng-born, North West, full-back nicknamed “Bale” –  thanks to his agility and educated left foot, the traits that are near-similar to those of Tottenham Hotpsur ace Gareth Bale – scored in Hammer Boys’ 2-0 win over Tshakhuma Tsha Madzivhandila at the weekend. The goal, on his JDR debut, meant the world to Bale as it was his first-ever as a professional footballer.

“I scored on my debut over the weekend and I was very excited because it was my first professional goal. The goal meant a lot to me. It will also boost my morale. Hopefully, I will continue to contribute more to the team,’’ Modise said.

Modise is clear about JDR’s objectives and ambitions this season, revealing their eyes are firmly on the main prize, that’s the automatic promotion to the top-flight.

“We are not just a team but we are a family. Obviously we want to finish top of the log to get a promotion to the premiership, that’s it. We will work hard for our goal."

SuperSport United have refused to read too much into AmaZulu's early struggles this season ahead of their DStv Premiership match at Kings Park ...
Sport
8 months ago

Stuart Baxter's selections have come under scrutiny in recent weeks and the Kaizer Chiefs coach has found himself having to explain the absence of ...
Sport
8 months ago

Marumo Gallants goalkeeper Washington Arubi has promised they will overturn the 1-2 defeat they suffered in the CAF Confederation Cup first leg ...
Sport
8 months ago
Next Article