Davids: Mabasa still being nursed back to playing 90 minutes for Pirates 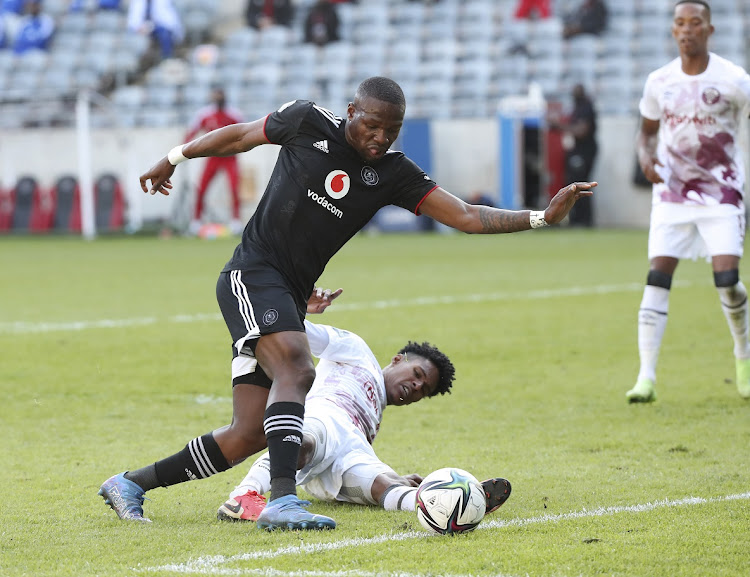 Tshegofatso Mabasa has been used sparingly by Orlando Pirates at the start of the 2021-22 season despite seeming to almost always have a goal in him because “he cannot yet complete 90 minutes”, said Bucs' co-caretaker coach Fadlu Davids.

Mabasa, who came off the bench to powerfully head home another crucial goal in Bucs' 1-0 DStv Premiership win against Swallows FC at Orlando Stadium on Saturday, has struggled to overcome a foot injury and an ankle injury in the past three years.

After a strong first campaign at Pirates in 2019-20 signing from Bloemfontein Celtic, scoring seven league goals in 22 matches, the big striker has spent long periods out of action on the medical table and in rehabilitation. He played just 11 times in 2020-21, missing the entire start of the campaign until November, but still managed five goals.

Bucs supporters have grown frustrated that even when fit, Mabasa seems to not be given a run to establish himself in Pirates' starting line-up.

Davids said right now, having recovered from another injury that saw him miss the end of last campaign and the preseason, Bucs are still nursing Mabasa to a point of being able to play 90 minutes at intensity.

"He was cleared on August 14, which was our first match against Swallows [in the MTN8]. So he's still going through his pre-season,, building him up in the individual periodisation plan," said the Bucs' co-coach.

"So far he's doing well. We know he cannot yet complete 90 minutes in terms of the intensity we want, but it's step by step for him.

"He always has a goal in him, he's a different type of striker to what we have, and he's always in the right place at the right time.

"Not a lot of players have that instinct, that ability to smell being in the right position. He has it."

Mabasa made his return in the 78th minute of Pirates’ 0-0 league draw against Marumo Gallants on August 24, ahead of the Fifa international break. He came on in the 59th minute against Swallows, rising above centreback Sipho Sibiya to head in the 78th-minute winner.

Davids and Mandla Ncikazi have taken over steering Bucs' ship after a rocky start to 2021-22, when Zinnbauer departed after two games. The weekend's win against Swallows was Pirates' first of the campaign, four matches in.

A run in the XI for Mabasa could be just the tonic for Pirates to pick up more victories. At 24, and given his positional, physical and finishing qualities, Mabasa also could provide a striking option in line with new Bafana Bafana coach Hugo Broos' youth emphasis for the national team's 2022 World Cup campaign.

Pirates' list of injury concerns in the past year added another major setback when Davids revealed on the weekend that star forward Thembinkosi Lorch will be out for the remainder of the 2021-22 season.