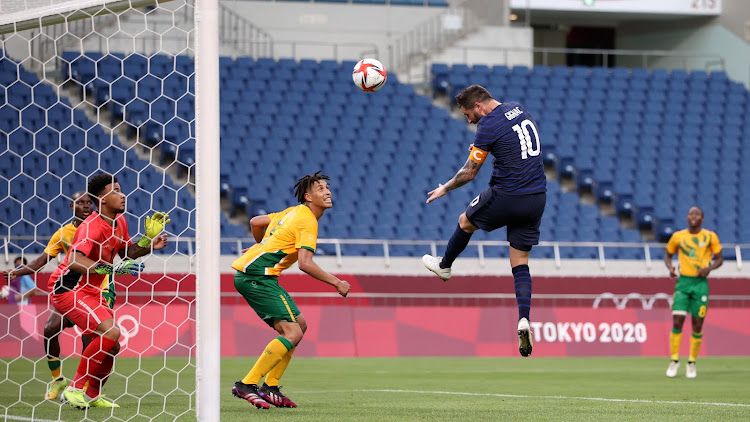 As South Africans continued to survey the wreckage after the Under-23's heartbreaking defeat to France in a seven-goal thriller at Saitama Stadium on Sunday‚ coach David Notoane conceded that it was his side's defensive frailties that ultimately cost them the Tokyo Games Group A match.

The South Africans led the match on three occasions but surrendered the lead each time‚ eventually losing 4-3 in referee's optional time.

It was a game that many have analysed with a fine-tooth comb‚ especially after the South Africans also failed to take advantage of a penalty that was missed by Luther Singh.

But Notoane continued to back his players and said he was proud after their at times devastating performance.

"It was a difficult game‚ an exciting game and emotional game‚" he said.

"We went for it‚ they also came for it‚ and I think at the end‚ it was a game of margins of error.

"We made more mistakes in our defensive actions than France - they scored four and we scored three.

"But I am proud of the boys‚ for their effort‚ for their commitment‚ for the quality of the play of the football they are capable of.

"So‚ sad as it is‚ last one to go‚ difficult one [against Mexico] but ja‚ that is football and what more can you say."

SA lost to Japan in their opening game of the tournament last week - Takefusa Kubo scored the only goal of the game - and Notoane said after the defensive formation he employed against the host‚ he changed things around against the French.

"The challenges that were before us when we faced Japan were different. We only had three days to prepare. We had seven days without training‚ almost‚" he said.

"So we decided to go with an approach against Japan that would allow us to have this kind of performance in terms of energy so that we did not risk burning ourselves out against Japan and then when we faced France we would be left with nothing in our reserves.

"Off course we also had Mexico [in the last group match in mind]. So it was primarily to manage our energy levels and hoping to take a draw [against France] that was not to be."

The South Africans had no business losing this match after leading three times‚ but they somehow contrived to allow the French to come back through a hat-trick from the troublesome André-Pierre Gignac before the European side eventually snatched the winner courtesy of a late strike from Teji Savanier.

SA are currently bottom of the table in Group A and face Mexico in their last match of the Olympic Games on July 28 2021.

The coach said they would give a good account themselves before returning home with their held high.