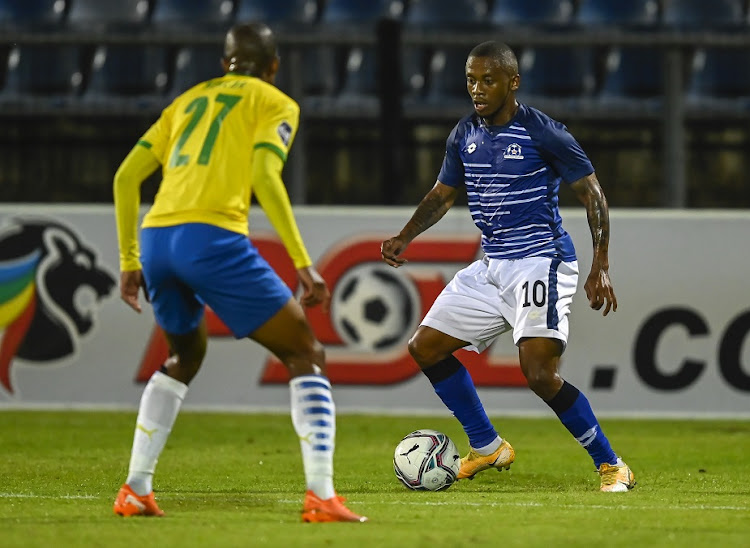 Kadodia’s denial comes amid a litany of speculation in the media about the duo. One report this week was that the deal for Sundowns to sign the duo, who scored 15 league goals between them to save the Pietermaritzburg club from relegation, has been concluded.

“No, no I don’t know who’s making that speculation,” Kadodia said on Friday morning.

“I’m unaware of all that. Nothing at all – there’s been no contact from Sundowns or anybody. I don’t know about it.”

Further probed why then the speculation reached fever pitch on Thursday, with some reports saying it was a matter of time before the players were unveiled at Sundowns, Kadodia said: “I don’t know who’s trying to sell those stories, I don’t know.

“These players [Kutumela and Hlongwane] are still under contract. They’re contracted players and there will be transfer fees involved if anyone were to buy them from us.”

The news of Kutumela’s pending departure, if it did happen, would rattle Maritzburg coach Ernst Middendorp, who relied on his skipper to get goals for the club last season.

Kutumela’s 12 goals helped the Team of Choice finish 13th in the Premiership after the club battled to move from the bottom of the log for the better part of the 2020-21 campaign.

Mayor vows to ensure Maritzburg United are not sold

The Team of Choice didn’t get funding from the municipality last season, after it was placed under administration
Sport
1 year ago

The 21-year-old Hlongwane capped his remarkable first full season in the top-flight with a call up to the Bafana Bafana team that defeated Uganda 3-2 in an international friendly last month. Hlongwane scored on debut against the Cranes in the match at Orlando Stadium on June 10.

The striker, who is also adept at playing as a winger, could also be part of the SA Under-23 Olympic squad that is expected to be announced on Saturday.

Moves for Kutumela and Hlongwane to Sundowns would come as no surprise, as United and the Brazilians have a well-established business relationship that has seen them exchanging a number of players in recent times.

Lebohang Maboe, Brian Onyango and Rushine de Reuck have all joined Sundowns from Maritzburg in the past three seasons. Strikers Jeremy Brockie and Ali Meza found homes at Maritzburg after struggling to break into Downs’ star-studded line-up.

Meza, of Venezuela, joined Maritzburg on a free transfer at the start of the 2020-21 season, replacing Brockie, who returned to his native New Zealand.

A promising young right back, Malebogo Modise (22), is currently on loan to Maritzburg from Sundowns.

Since the transfer window opened on Thursday, Bloemfontein Celtic left-back Sifiso Ngobeni and striker Neo Maema have been confirmed as new players at Sundowns.

Maritzburg United chairman Farook Kadodia has stressed the club is not “up for sale”‚ clarifying that if the club is unable to secure additional ...
Sport
1 year ago

Maritzburg United captain Thabiso Kutumela is not for sale, according to club chairman Farook Kadodia.
Sport
1 year ago
Next Article