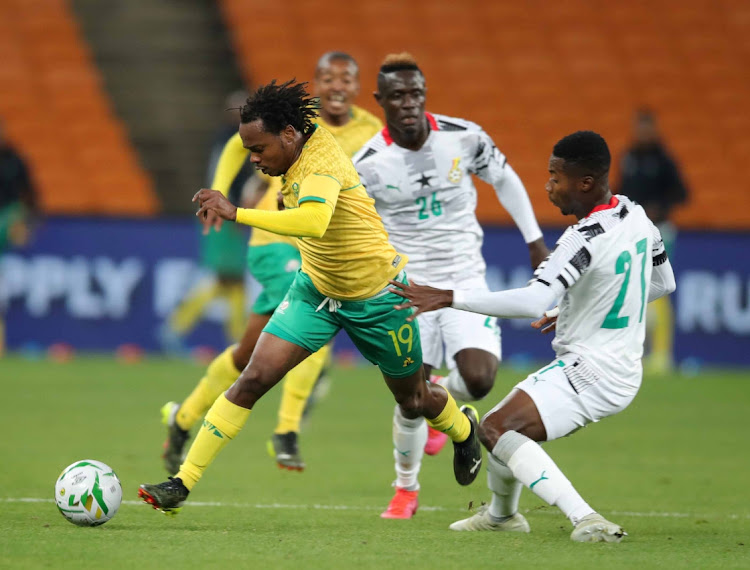 Thapelo Morena’s two close range misses mixed with a glaring error by Siyanda Xulu at the back hindered a purposeful Bafana Bafana side from beating Ghana in their penultimate 2022 Africa Cup of Nations (Afcon) qualifier at FNB Stadium last night.

The 1-all draw means, in order to qualify for Afcon,  SA need to avoid a defeat in their last game away to Sudan on Sunday (6pm SA time). Percy Tau equalised for SA four minutes after Mohammed Kudus had drawn first blood in the 48th minutes.

Even the midfield was packed with defensive-minded personnel, with two holding midfielders in Rivaldo Coetzee and Andile Jali, who’d pick up what looked like a groin strain unmarked and  be replaced by Ben Motshwari a few minutes prior to the half-hour mark, holding it down.

Conversely, the Black Stars had two debutants in their XI. Free agent striker Kwame Opoku, formerly of local giants Asante Kotoko, alongside Emmanuel Gyasi, who’s  on the books of Italian Serie A outfit Spezia, were the two debutants in  Ghana’s  first eleven.

For all their defensive XI, Bafana still dominated the proceedings in the first half as Ghana hardly made inroads the host’s half. Bafana used both flanks to penetrate the visitors’ defence. Full-backs Morena and Sifiso Hlanti on the right and left side respectively added numbers upfront by initiated most of SA’s attacks.

The telepathic understanding between Tau and his erstwhile Mamelodi Sundowns teammates Themba Zwane also helped Bafana whenever they were in possession. The duo constantly put Ghana’s rearguard with those interplays, exploiting pockets of spaces.  SA’s best chances in the first half fell to Morena but on both occasion lack of composure let him down.

Ghana improved in the second stanza. Ajax Amsterdam starlet Kudus, 20, was in the thick of things for the visitors, using his educated left foot to spray long balls in wind spaces. Kudu’s tenacity paid off in the 48th minute when he broke the deadlock Mohamed Kudus deadlock, capitalising on Xulu’s insupportable mistake.

After taking the lead, Ghana took their foot off the pedal. For that reason, Bafana found the equaliser, via Tau with his weaker right foot four minutes later. Tau’s cool finish came after he was brilliantly set up by Gamildien.

Bafana Bafana coach Molefi Ntseki has managed to salvage a relatively strong squad amongst the chaos wreaked on teams by European clubs not releasing ...
Sport
1 year ago

Ghana arrived in South Africa in the early hours of Wednesday morning, passed their Covid-19 tests, and trained at FNB Stadium in the evening minus ...
Sport
1 year ago
Next Article