Showmax comes on board for match officials 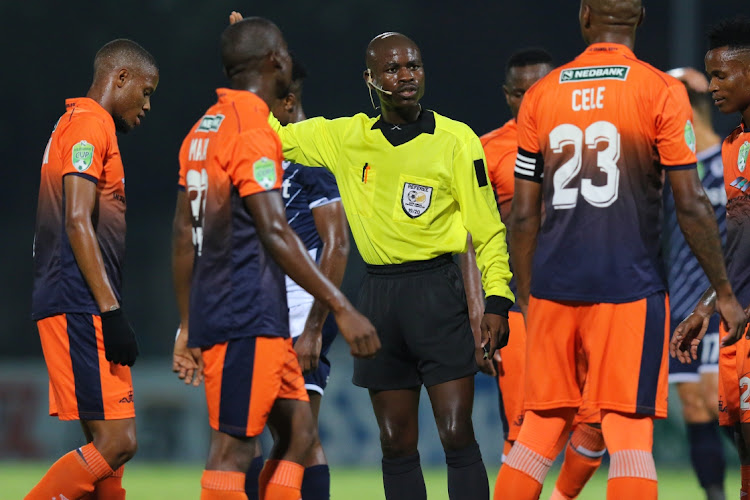 Finally, Safa referees have a uniform after months of confusion when they officiated in Nike and Puma regalia.

They will now be wearing a sponsored Le Coq Sportif Showmax branded kit when the DStv Premiership and GladAfrica matches resume next week.

In October last year, Safa announced that they signed a five-year sponsorship with the Multichoice Group, under the Showmax brand to improve the state of refereeing in the country.

The referees will be known as the Showmax Safa referees, and their agreement included a redesigned and rebranded referee’s kit.

Safa chief executive Tebogo Motlanthe said they are pleased that their referees will be wearing branded proper kits in all the matches from the lower league to the Premiership.

“Remember we had launched the sponsorship for officials somewhere last year, and of course, due to production and Covid-19, which happened, it took time, but it is part of that agreement,” Motlanthe told Sowetan yesterday.

In the past, Safa and the Premier Soccer League (PSL) were involved in the battle over OUTsurance sponsorship as that infringed upon the rights of the league main title sponsor Absa by then and Nedbank, who also play in the insurance space.

The PSL then subsequently lodged a dispute, and match officials stopped wearing the kit branded with the OUTsurance logo.

Safa then went on to lose the battle, and since then, referees were wearing different regalia.

Motlanthe is now pleased that there won’t be such conflicts this time with Showmax falling under Multichoice, who are sponsoring the league.

“There won’t be anything like that, remember that the issue has always been conflict of interest and you know now the league is sponsored by Multichoice. So there is no conflict, either direct or indirect,” he said.

“We are looking forward because this sponsorship will also touch people on the ground, and we are working around the clock so that even our referees from our lower league are part of Showmax.

“So we are attending to all that, and we want to give gratitude to Showmax, which still sponsored us even during these difficult times, and we are looking forward to a good partnership with them.”